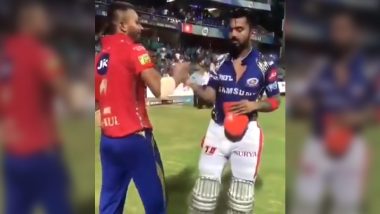 To mark the occasion of Friendship Day 2020, Kings XI Punjab went down memory lane and relived the moment when Hardik Pandya and KL Rahul exchanged jerseys after the conclusion of a match in IPL 2018. The duo is known to share a great bond and fans have witnessed their camaraderie on many times. One of them was when they swap jerseys after the conclusion of Mumbai Indians vs Kings XI Punjab match in Indian Premier League 2018. The tradition was seen in football and NBA matches but it was happening for the first time on a cricket field. Rajasthan Royals Hilariously Trolls Kings XI Punjab Over IPL 2020 Announcements.

The crucial match went right down to the wire but Mumbai Indians came on top by three runs. KL Rahul, who scored 94 runs off 60 balls in the match, was expected to be dejected after the defeat. However, like a true sportsman, the wicket-keeper greeted his rival-cum-friend Hardik and the duo was captured in an iconic moment. So, as India was celebrating Friendship Day, KXIP relished the moment again and shared the video. Have a look. BCCI Gets Green Signal From Indian Government to Conduct IPL 2020 In UAE, Excited Fans Trend #IPLinUAE.

Talking about the Hardik-Rahul rivalry, the former has often been taken to the cleaners while bowling to the KXIP opener. Well, these two stars will face each other again in the forthcoming edition of IPL and will like to get the better of each other.

Rahul, who will lead KXIP this season, will aim to extend his golden run against Mumbai while Pandya will look to pierce the defences of his friend. Also, KXIP must not forget that Pandya can hurt them with his other attribute to which is batting.

(The above story first appeared on LatestLY on Aug 03, 2020 03:05 PM IST. For more news and updates on politics, world, sports, entertainment and lifestyle, log on to our website latestly.com).