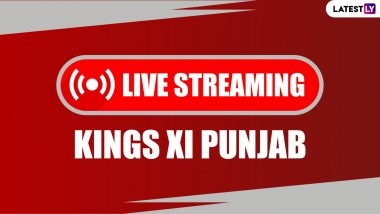 Live Streaming of IPL 2020: Kings XI Punjab (KXIP) will begin their quest for a maiden IPL title when the KL Rahul-led side take on Delhi Capitals in their opening game of IPL 2020. KXIP have reached the finals of the tournament just once but will be looking to replicate that feat and go one better. Meanwhile, KXIP fans searching for where and how to watch Kings XI Punjab matches in IPL 2020 should scroll down below for all information, including live telecast, live streaming inline details on Hotstar and Star Sports. KXIP Squad for IPL 2020 in UAE: Check Updated Players' List of Kings XI Punjab Team Led by KL Rahul for Indian Premier League Season 13.

This is the second time the tournament will be played in the United Arab Emirates, with 2014 bring the last time the competition was held in the gulf country. It was the same year that KXIP managed to reach the finals of the tournament and this will give them much needed to boost heading into IPL 2020. KXIP Team Profile for IPL 2020: Kings XI Punjab Squad in UAE, Stats & Records and Full List of Players Ahead of Indian Premier League Season 13.

KXIP boast several heavyweights of the shortest format of the game and are one of the favourites. With the likes of Chris Gayle, Mayank Agarwal, Sarfaraz Khan, Mohammad Shami and skipper KL Rahul in their ranks, the franchise will fancy their chances. KXIP also added Glenn Maxwell, Sheldon Cottrell and Chris Jordan during the player auction which was held last in December last year.

Kings XI Punjab (KXIP) fans across India can catch the live action of all KXIP matches in IPL 2020 on Star Sports channels. Star Sports is the official broadcaster of Indian Premier League (IPL) in India and will be live telecasting all the matches for IPL fans on its channels. The IPL 2020 matches will be available in Hindi commentary as well on Star Sports 1 Hindi and its HD channel. Those not able to watch the games live on Star Sports can also catch live action online. Disney+ Hotstar will be live streaming all the IPL 2020 matches, including all KXIP matches, online for fans in India. Meanwhile, fans from the USA Can watch live streaming of KXIP matches in IPL 2020 on Hotstar USA.

Kings XI Punjab start their IPL 2020 season with a clash against Delhi Capitals on September 20, 2020, at the Dubai International Stadium. This will be their first time that KL Rahul will lead KXIP after playing last year under the leadership of Ravi Ashwin, who moved to DC this year.

(The above story first appeared on LatestLY on Sep 20, 2020 07:02 PM IST. For more news and updates on politics, world, sports, entertainment and lifestyle, log on to our website latestly.com).