Indian Premier League 13 began with the blockbuster opening clash between titans Mumbai Indians and Chennai Super Kings. Mumbai Indians are the defending champions on IPL. They beat CSK by 1 run in last year’s final and will hope to defend their crown. They can become the second team in IPL history to successfully retain the IPL title. 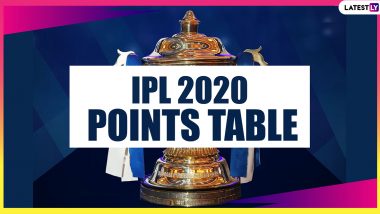 Sunrisers Hyderabad (SRH) booked their place in IPL 2020 playoffs as they defeated Mumbai Indians (MI) by 10 wickets in the final league game of the competition at Sharjah. David Warner's team will face off with Virat Kohli's men in Eliminator 1. Mumbai Indians finished top of the team standings and will take on Delhi Capitals in Qualifier 1. Check out the IPL 2020 points table updated with net run rate. IPL 2020 Playoffs Who Plays Who? Check Match Schedule, Timings, Venues and Teams for Qualifier 1, Qualifier 2 and Eliminator.

Indian Premier League 13 began with the blockbuster opening clash between titans Mumbai Indians and Chennai Super Kings. Mumbai Indians are the defending champions on IPL. They beat CSK by one run in last year’s final and will hope to defend their crown. Should MI retain the IPL trophy, they can become the second team in IPL history after Chennai Super Kings to successfully defend the IPL title. IPL 2020 Purple Cap Holder Bowler With Most Wickets: Winners’ Table and Updated List of Leading Wicket-Takers in Dream11 Indian Premier League Season 13 in UAE.

Mumbai Indians are also the most successful team in Indian Premier League history with four titles to their name while Chennai Super Kings have won three titles. Only Kolkata Knight Riders (2012 & 2014), Sunrisers Hyderabad (2016) and Rajasthan Royals (2008) are the other teams to have won the title. Deccan Chargers, now defunct, won the title in 2009. IPL 2020 Orange Cap Holder Batsman With Most Runs: Winners’ Table and Updated List of Leading Run-Scorers in Dream11 Indian Premier League Season 13 in UAE.

Like the previous editions, each team will be awarded two points for a win and a tie will be eventually decided by super overs. In case of a no result, both teams will share a point each. While the top four ranked teams progress to the playoffs at the end of the group stage, positions and ranks will be decided by run-rates if teams are tied on points. The team with a better run-rate will qualify for the playoffs in case teams are tied on points.IPL 2020 began on September 19 and will be played till November 10 when the final is to be held.

The group stage of IPL 2020 will run until November 3 with Mumbai Indians playing Sunrisers Hyderabad in the final group stage game of IPL 2020. Each team will play 14 games each in the group stage of the tournament with top four ranked teams at the end of the league stage qualifying for the knockout or playoff stage. Matches in the entire tournament will be played at three stadiums with Dubai, Abu Dhabi and Sharjah the three venues which will host the matches. Each team will play at least two games in each of the venues.

(The above story first appeared on LatestLY on Oct 31, 2020 06:40 PM IST. For more news and updates on politics, world, sports, entertainment and lifestyle, log on to our website latestly.com).