Ideally, during the IPL season in March-April-May, most of the bilateral cricket series doesn’t take place. However, with IPL 2020 being held in a new window, there is some doubt over the availability of various overseas players. 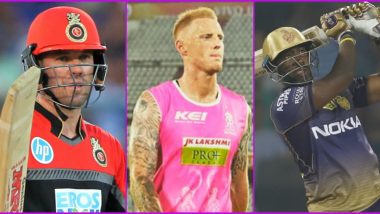 Indian Premier League 2020 (IPL 2020) is scheduled to begin on September 19 in the United Arab Emirates (UAE). The IPL 2020 was initially scheduled to take place in March-April but was postponed due to coronavirus pandemic. Following the postponement of ICC T20 World Cup 2020 in Australia, Board of Control for Cricket in India (BCCI) decided to use the window for IPL 2020. Ideally, during the IPL season in March-April-May, most of the bilateral cricket series doesn’t take place. However, with IPL 2020 being held in a new window, there is some doubt over the availability of various overseas players. IPL 2020 Update: Franchises Could Travel With Trimmed Squads for Indian Premier League 13 in UAE.

While South African players could be unable to travel out of their country due to coronavirus lockdown still in place, Australian and England players will be busy in bilateral limited-overs series and are likely to miss start of the IPL 2020 as they will be arriving in the UAE late. Similarly, West Indies players will be busy with Caribbean Premier League 2020 (CPL 2020) and are expected to arrive late in UAE. Sri Lanka Cricket (SLC) has directed its players to take part in Lanka Premier League (LPL) and not to leave the country for any other league. Meanwhile, let’s take a look at players who could miss IPL 2020 or part of it due to various reason. Indian Premier League 13 Final Likely to Be Postponed From November 8 to 10 to Optimise Diwali Week.

IPL franchises are expected to reach the UAE by mid-August and will begin preparations for the upcoming season. Reportedly, the teams could travel to the UAE with a trimmed squad.

(The above story first appeared on LatestLY on Jul 31, 2020 04:16 PM IST. For more news and updates on politics, world, sports, entertainment and lifestyle, log on to our website latestly.com).