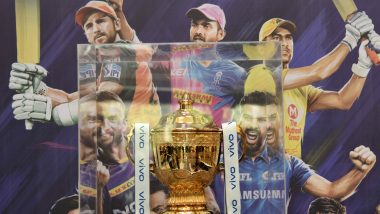 With IPL 2020 set to take place in UAE later in the year, the governing council will meet with the franchises on Sunday (August 2, 2020) to discuss standard operating procedures (SOP) for this year’s tournament. The competition will be played from September 19, 2020, onwards in the United Arab Emirates as confirmed by Chairman Brijesh Patel. This will be the third time that the cash-rich league will take place outside India. Indian Premier League 13 Final Likely to Be Postponed From November 8 to 10 to Optimise Diwali Week.

According to a recent report from Times of India, when the governing council and franchisees meet via teleconference on the weekend, the strength of each squad for IPL 13 will be discussed in order to avoid crowded dressing rooms and dugouts. Ideally, each team has 20-15 players in its squad with additional 10-15 members in support staff besides the executives. Indian Premier League Governing Council Meeting on August 2 Likely to Finalise Schedule.

It is understood that teams will be asked to limit the number of players in their teams to just 20, however, franchises believe that squad strength should not be affected. The last time IPL was played in UAE in 2014, teams carried a trimmed squad. Each side played their opening five games of that edition in the UAE.

‘If at all there are directions on the squad strength, then the franchises would prefer to prune their non-playing staff. Some franchises will leave this decision to the coach and team management. Ideally, if there is a cap then it should be on the entourage as a whole’ a franchise official was quoted by TOI.

‘On match days, there could be a cap on the number of people a franchise brings to ground. Even a few from the support staff could be asked to stay back in the hotel,’ the official added. Each team will have to create its own bio-secure bubble once they reach UAE ahead of the start of the tournament.

(The above story first appeared on LatestLY on Jul 31, 2020 09:41 AM IST. For more news and updates on politics, world, sports, entertainment and lifestyle, log on to our website latestly.com).