IPL 2022: Why Dinesh Karthik Has Set Himself a Short-Term and a Long-Term Goal?

Royal Challengers Bangalore (RCB) wicketkeeper-batter Dinesh Karthik has said that he has set himself two goals this season -- that of filling the void left by South African great AB de Villiers and, in the long-term, reclaim his place in the India team for the 2022 ICC T20 World Cup in Australia. 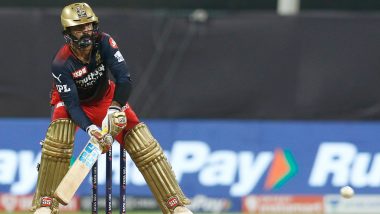 Mumbai, April 18 : Royal Challengers Bangalore (RCB) wicketkeeper-batter Dinesh Karthik has said that he has set himself two goals this season -- that of filling the void left by South African great AB de Villiers and, in the long-term, reclaim his place in the India team for the 2022 ICC T20 World Cup in Australia. In a candid talk with former RCB skipper Virat Kohli on RCB Bold Diaries, Karthik added that his dream was to help India "cross that line" of winning multi-nation tournament, which has eluded the country for a long time now. LSG vs RCB, Dream11 Team Prediction IPL 2022: Tips To Pick Best Fantasy Playing XI for Lucknow Super Giants vs Royal Challengers Bangalore Indian Premier League Season 15 Match 31.

Karthik has been in sublime form in IPL 2022 and his batting prowess is one of the reasons behind RCB's charge in this year's tournament, the latest being his unbeaten 66 against Delhi Capitals where he hammered the rival bowlers for five fours and an equal number of maximums in just 34 deliveries. That superlative knock saw RCB win at the Wankhede by 16 runs on April 16. Karthik came at a time when RCB were wobbling at 92/5.

Speaking about his goals, Karthik said, "There is a small-term goal and there's a bigger vision as well. The small-term goal is to obviously do very well for RCB. I think credit to the RCB backroom staff. The day I got picked, Sanjay (Bangar) bhai called me and said 'DK you'll be playing the finisher's role'. We have lost out on AB; we can't replace him with anybody half as good. We need 2-3 players to do that role'. He is that good. Then I took it upon myself to figure out that 'okay, this is what I want to do'." Karthik said that his bigger vision was to play the T20 World Cup and make the country proud. CSK vs GT, IPL 2022: David Miller's Knock Against CSK Takes Him 'back to Memory Lane'.

"The bigger vision is that I want to play for the country. I know there is a World Cup around the corner. I want to be part of that World Cup desperately and help India cross that line. It's been a long time since India won a multi-nation tournament. I want to be that person who is helping India do that. For that, you need to be aware of so many things, try and be that player who people think 'hey this guy is doing something special'," he said. "Every day I practice with that intent in my mind. Credit to my coach who has put me through so many drills to make sure I get the best out of myself. As you grow older, it's important to stay fit. I have tried my best to do it. I am so happy contributing to RCB. This is my second time with RCB and I wanted to do something special," added the 36-year-old Karthik.

(The above story first appeared on LatestLY on Apr 18, 2022 12:48 PM IST. For more news and updates on politics, world, sports, entertainment and lifestyle, log on to our website latestly.com).