KL Rahul (LSG) could be named as the captain of your LSG vs RCB Dream11 Fantasy Team, while as Glenn Maxwell (RCB) can be selected as the Vice-captain. 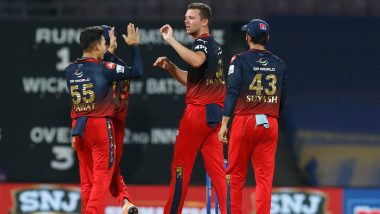 Lucknow Super Giants (LSG) will take on Royal Challengers Bangalore (RCB) in match 31 of the ongoing Indian Premier League (IPL) 2022. The LSG vs RCB clash in IPL 2022 will be played at Dr. DY Patil Sports Academy in Navi Mumbai on April 19, 2022 (Tuesday) at 07:30 pm. The new-entrant Lucknow Super Giants (LSG) are having a glorious start to their maiden IPL season so far as the team, after winning their last encounter against Mumbai Indians on Saturday, secured second place on the points table. Meanwhile, fans searching for RR vs KKR Dream11 Team Prediction for IPL 2022 clash can scroll down below for all the tips and suggestions on compiling the fantasy playing XI. TATA IPL 2022 Time Table in PDF Format for free Download Online: Get Full Schedule of Indian Premier League With Match Time and Venue Details.

Lucknow Super Giants, after winning four matches out of six matches, have earned eight points on the table with the net run rate of +0.296. LSG were spot on with the bat and bowl against MI in their previous match, with Captain KL Rahul scoring century and bowler Avesh Khan’s four over spell of 3 for 30 being the highlights of the match. Meanwhile, Royal Challengers Bangalore (RCB) have also won four out of six matches and placed just below the Lucknow Super Giants (LSG) on points table at number three. RCB played their last match against Delhi Capitals (DC) on Saturday and won by 16 runs with Dinesh Karthik and Jos Hazelwood being the star performers for RCB. Both, Lucknow Super Giants (LSG) and Royal Challengers Bangalore (RCB) are equally in a good form and with the stable line-up.

KL Rahul (LSG) could be named as the captain of your LSG vs RCB Dream11 Fantasy Team, while as Glenn Maxwell (RCB) can be selected as the Vice-captain.

(The above story first appeared on LatestLY on Apr 18, 2022 12:27 PM IST. For more news and updates on politics, world, sports, entertainment and lifestyle, log on to our website latestly.com).