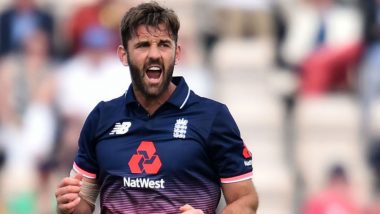 London, June 29: England fast bowler Liam Plunkett feels he has still got what it takes to represent his country on the international arena despite being dropped from their training squad ahead of West Indies series. 35-year-old Plunkett, who scalped 11 wickets during England's victorious campaign at last year's World Cup including three in the final, came to know from social media that he wasn't picked in the 55-member training group.

"I think that's what it is. I appreciate it's sport, at the highest level, and new people are always coming in but do I still think I'm good enough to play for England? Of course," Plunkett was quoted as saying by The Guardian. "But that ship has sailed and I'm not a person to hold grudges. I'm trying to get on with the next thing at Surrey." Liam Plunkett, World Cup Winner England All-Rounder, Expresses Desire to Play for USA Cricket Team.

Plunkett also spoke about the prospect of playing for USA, the county where his wife resides. But for that to happen, he will have to serve a mandatory three-year residency period in the country to meet the eligibility criteria.

"I want to play for as long as I can for Surrey. Hopefully that's another three years. Then it's three years to qualify for the US," Plunkett said. "I might not even get into their team and I think I'd prefer to develop as a coach. But who knows? I might still be flying in at 42."

(The above story first appeared on LatestLY on Jun 29, 2020 11:50 PM IST. For more news and updates on politics, world, sports, entertainment and lifestyle, log on to our website latestly.com).