Royal Challengers Bangalore have the experience needed to battle these situations and they start the match with some champion cricketers. The side batting second holds the edge though. For LSG vs RCB live streaming online scroll down. 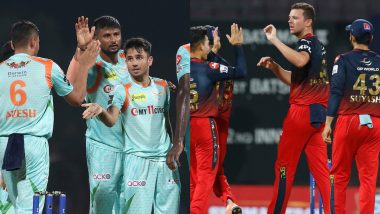 Royal Challengers Bangalore have played some positive cricket in this season of the Indian Premier League but needed the rub of the green to make sure they make it to the top four. They face Lucknow Super Giants in the eliminator in what promises to be a high-pressure encounter. There is no denying these teams have some world class names in their ranks but it will all boil down to who has more control on their nerves. The teams met in the group stage once with RCB coming out on top with skipper Faf du Plessis performing well. The qualifier one in the Eden Gardens saw Gujrat Titans chase down a massive score with ease hence toss will play a crucial role. LSG vs RCB Dream11 Team Prediction IPL 2022: Tips To Pick Best Fantasy Playing XI for Lucknow Super Giants vs Royal Challegers Bangalore Indian Premier League Season 15 Eliminator.

Faf du Plessis has scored 443 runs so far for Bangalore at an impressive average of 34 but Dinesh Karthik down the order has garnered all the headlines due to the impact he has had on the tournament. Virat Kohli has struggled but on his day remains the best batsman in world cricket and Lucknow will be wary of the threat he possess.

Lucknow fans will have their hopes on K L Rahul to come up with the goods considering he is one player that can single-handedly destroy the opposition attack. Deepak Hooda and Quinton de Kock have also regularly contributed to the team’s cause and the team has some descent slow bowlers that can make good use of the Eden Gardens pitch. LSG vs RCB, IPL 2022: Dinesh Karthik Is ‘That Rock’ of the Side, Says Bangalore's Mike Hesson.

Those unable to watch the LSG vs RCB match live on television can follow the game online. Disney+ Hotstar will be live streaming the Lucknow Super Giants vs Royal Challengers Bangalore match online for its fans in India. Fans, however, need to subscribe to Hotstar by paying a nominal subscription fee. Royal Challengers Bangalore have the experience needed to battle these situations and they start the match with some champion cricketers. The side batting second holds the edge though.

(The above story first appeared on LatestLY on May 25, 2022 05:33 PM IST. For more news and updates on politics, world, sports, entertainment and lifestyle, log on to our website latestly.com).