He was flown in as a replacement for the injured Vijay Shankar on the insistence of the team management during the World Cup and now Mayank Agarwal is not a part of the ODI team for the West Indies series. 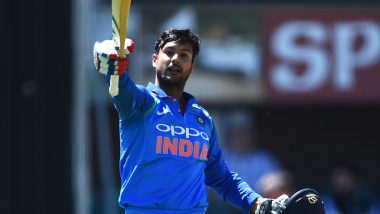 Mumbai, July 21: He was flown in as a replacement for the injured Vijay Shankar on the insistence of the team management during the World Cup and now Mayank Agarwal is not a part of the ODI team for the West Indies series. While an opener being called in for a middle-order all-rounder was no less a surprise, his exclusion for the team for the Windies series comes as a bigger shocker just when one thought the selectors would look forward to try and groom players with an eye on the 2023 World Cup.

Commenting on the whole jigsaw that saw Rishabh Pant being first called in to replace opener Shikhar Dhawan and then opener Mayank called in to replace all-rounder Vijay Shankar, chief selector M.S.K. Prasad put it on the demand of the team management and the written communication that came to them from England during the showpiece event. India Squad For West Indies Tour 2019: Shikhar Dhawan Returns, Rishabh Pant Replaces MS Dhoni as Wicketkeeper in Virat Kohli-Led Side.

"In between any series I don't do press conference and that has led to speculations. When Dhawan got injured, we already had a third opener in KL. We didn't have a left hander at top so the team management had requested for a left-hander and we had no option other than Pant. It confused many why middle-order came in for opener. Again why an opener for Vijay Shankar.

"When Shankar was injured, Rahul had a big fall at the boundary so there was a medical emergency on whether he will continue or not. At that time a written communication was given that a back-up opener was needed. That is when we went to Mayank," he explained.

IANS had already reported during the showpiece event that it was the team management which had asked for Mayank to be flown in. "If you see the record he had during the one-day series against the ‘A' teams, you will see that he scored 287 runs in four innings with two hundreds. Not to forget his 151 against Leicestershire in the warm-up game. That series was also played in June and July and the general thought is that he is versatile and can adapt well," the source had explained.

And now, Mayank has to go back and play domestic cricket and prove his mettle.

(The above story first appeared on LatestLY on Jul 21, 2019 04:49 PM IST. For more news and updates on politics, world, sports, entertainment and lifestyle, log on to our website latestly.com).