Mitchell Starc to Miss IPL 2018: Kolkata Knight Riders in Dock As Australia Fast Bowler Ruled Out Because Of Injury

The times are testing already for the newly-appointed captain, Dinesh Karthik, as the KKR team will find it difficult to find a replacement to fill the shoes that are as big as Starc’s! 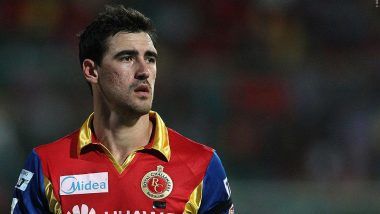 Mumbai, March 30: Mitchell Starc, the Australian fast bowler, will be unavailable for Indian Premier League (IPL) 2018 due to an injury in his right leg. Starc was purchased by Kolkata Knight Riders (KKR) for a whopping Rs. 9.40 Cr price tag in the IPL auction that took place in January this year.

The times are testing already for the newly-appointed captain, Dinesh Karthik, as the KKR team will find it difficult to find a replacement to fill the shoes that are as big as Starc’s!

The list of Australian players missing out on 11th VIVO IPL saw another name added to it, on Friday. Earlier, David Warner and Steve Smith were also banned, for their role in the ball-tampering scandal, from playing the cash-rich Twenty20 tournament, which starts on April 7. Kolkata Knight Riders IPL 2018 Tickets Available for Sale Online: Price, Dates, Home Matches Details of KKR in Indian Premier League.

A ‘tibial bone stress fracture’ in his right leg saw Mitchell Starc being ruled out of the ongoing Test match against South Africa, earlier today. In his absence, Chadd Sayers was handed a debut in the fourth match. Sayers’ inclusion in the playing XI was the fourth change in the side, as Steve Smith, David Warner, and Cameron Bancroft were banned by Cricket Australia (CA) a couple of days back.

The KKR team will be banking heavily on the young pace-duo of Shivam Mavi and Kamlesh Nagarkoti who were a find in India’s successful Under-19 ICC World Cup campaign earlier this year. Also, other notable names in the KKR ranks are only Mitchell Johnson and Vinay Kumar.

The already limited-resources’ KKR squad has suffered another blow as they do not afford the luxury of a strong bench strength this season. The injury news comes as a shocker for the Kolkata franchise who had invested a lot in the Australian pacer at this auction. The KKR team management is already waiting for injury updates on Chris Lynn and Andre Russell.

No replacement was announced by the KKR team when the reports last came in. It will be interesting to see how the Kolkata Knight Riders’ team copes with the absence of their star fast bowler – Mitchell Starc! Stay tuned with us all the latest updates on Indian Premier League (IPL) 2018.

(The above story first appeared on LatestLY on Mar 30, 2018 04:54 PM IST. For more news and updates on politics, world, sports, entertainment and lifestyle, log on to our website latestly.com).