Mohammad Ashraful Birthday Special: 158 vs India and Other Brilliant Knocks by the Bangladesh Batsman 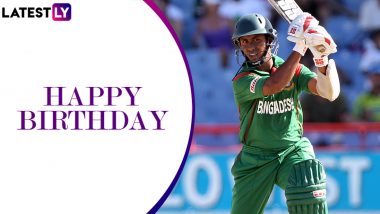 Bangladesh batsman Mohammad Ashraful celebrates his 36th birthday on Tuesday (July 7, 2020). Hailing from Dhaka, Ashraful's career is marred with controversies. However, nothing can deny the fact that he's one of the most talented batsmen to have donned the Bangladesh jersey. The right-handed batsman is blessed with an impeccable technique through which he has played several astonishing knocks. In fact, he is the youngest batsman in history to score a Test century, achieving the feat at the age of 17 years and 61 days. Below, we’ll look at some of his best performances. Bangladesh’s Tour of Sri Lanka 2020 Unlikely to Happen As per Schedule.

Ashraful was touted to become one of the greats of the game. However, he faced a five-year ban from international cricket in 2013 on spot-fixing charges and hasn’t been able to don the national jersey again. Nevertheless, he still aims to make a comeback and the batsman certainly has the potential to do so. Speaking of his numbers in international cricket, the right-handed batsman has 2737, 3468 and 450 runs from 61 Tests, 178 ODIs and 23 T20Is. Meanwhile, as Ashraful turns a year older, let’s revisit some of his best performances.

114 Vs Sri Lanka in Colombo

Bangladesh was no match against Sri Lanka in the second match of Asian Test Championship in 2001. However, Ashraful didn’t put his guards down and gave his side something to cheer about. Facing the likes of Muttiah Muralitharan and Chaminda Vaas, the right-handed batsman scored a stellar hundred and proved his potential. He also became the youngest centurion in the history of Test cricket.

158 Vs India in Chattogram

The Bangla Tigers were tottering at 54/3 in the 2nd match of 2004 Test series against India. However, Ashraful came in to bat at number five and made a fightback. He brilliantly tackled the Indian bowlers and scored 158 off 194 deliveries. He, however, didn’t receive much support from his other teammates as the home team lost the game by an innings and 83 runs.

94 Vs England in Nottingham

Chasing 392 in the 4th ODI of 2005 series against England, Bangladesh’s loss was set on the cards. Well, it eventually happened but not before a stupendous knock from Ashraful. Coming to bat at number four, he took the England bowlers by storm and scored fours and sixes all over the park. He ended up scoring 94 runs off mere 52 deliveries. However, his effort didn’t prove to be enough as England won the game by 168 runs.

100 Vs Australia in Cardiff

History was scripted when Australia locked horns with Bangladesh in the 2nd match of 2005 Natwest series. Ricky Ponting and Co were the clear favourites to win the encounter. However, the Bangla Tigers had different ideas. Courtesy a magnificent bowling performance, the Men in Yellow could only post 249/5 while batting first. However, Aussies still had the services of Glenn McGrath and Jason Gillespie. Nevertheless, Ashraful rose to the occasions and scored a memorable ton. His efforts guided Bangladesh to an emphatic five-wicket triumph against the mighty Australians.

(The above story first appeared on LatestLY on Jul 07, 2020 10:01 AM IST. For more news and updates on politics, world, sports, entertainment and lifestyle, log on to our website latestly.com).