Indian batters are currently in good touch. Virat Kohli had his phases of average and above average performances since the Asia Cup and then in the T20 series against Australia. Suryakumar Yadav, another batting sensation in good form currently, is expected to top batting charts in the series against South Africa. 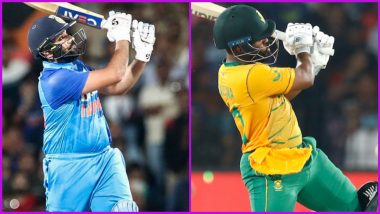 Quinton de Kock finished as the leading rin-scorer in the IND vs SA T20I series after registering back-to-back half-centuries in the final two games of the series. Davi Miller is second after a brilliant century in the second game. Suryakumar Yadav and KL Rahul come in next as Rilee Roussow completes the top five after a ton in the final game. Most Wickets in India vs South Africa T20I Series 2022: Get Updated List of Leading Wicket Takers and Top Bowlers in IND vs SA Latest Cricket Matches

South Africa has arrived in India for a three-match T20 and ODI series. South Africa's tour of India will commence with the much crucial three-match T20 series. The first T20 match will be played on 28 September 2022 at Greenfield International Stadium, Thiruvananthapuram. The remaining two T20 matches are scheduled on 02 and 04 October. Subsequently, three-match ODI series will be played, starting from 06 till 11 October. Indian batters are currently in good touch. Rohit Sharma had a decent series against Australia a few days back. Virat Kohli had his phases of average and above average performances since the Asia Cup and then in the T20 series against Australia. Former Indian captain will avail every chance in the upcoming T20 series against SA to further revitalise his form before T20 World cup. Suryakumar Yadav, another batting sensation in good form currently, is expected to score as many runs in the series against South Africa. India vs South Africa 2022 Schedule for Free PDF Download Online: Get IND vs SA T20I and ODI Series Fixtures, Time Table With Match Timings in IST and Venue Details.

(The above story first appeared on LatestLY on Sep 28, 2022 08:25 PM IST. For more news and updates on politics, world, sports, entertainment and lifestyle, log on to our website latestly.com).