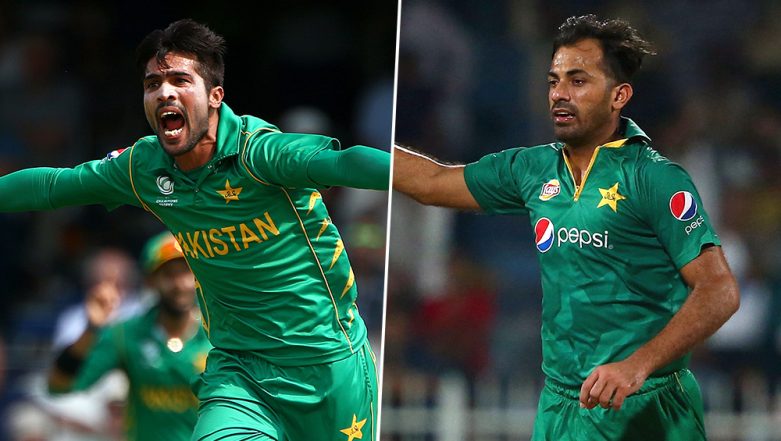 Pakistan national cricket team has finalised their squad for the upcoming ICC Cricket World Cup 2019, which starts on May 30 in England and Wales. May 23 is the deadline for teams to name their final 15, post that teams will need ICC’s clearance to make any changes. Meanwhile, after Pakistan’s dismal show in the recently concluded series against England, the selectors have included senior fast-bowlers Mohammad Amir and Wahab Riaz in the 15-man squad. Apart from the duo, middle-order batsman Asif Ali, who had good outing against Engalnd too has been added to the squad. Asif Ali, Pakistan Cricket Team Player, Loses Two-Year-Old Daughter to Cancer; Twitter Pays Heartfelt Condolences.

The trio replaces Abid Ali, Faheem Ashraf and Junaid Khan in Pakistan’s final squad for World Cup. Interestingly, Wahab’s last ODI outing was against India in the ICC Champions Trophy 2017 against India in a first-round match.

“The bowling unit during the England ODIs has not clicked as anticipated or expected; if we have at our disposal two vastly experienced pace duo of Amir and Wahab, then it will be foolish not to include them,” said Inzamam ul Haq, chairman Pakistan men’s selection committee. Pakistan’s Possible Jersey for ICC Cricket World Cup 2019 Surfaces on Twitter, Fans Give a Thumbs Down to CWC Kit.

Amir was ruled out of the England series after he suffered from chicken pox. The pacer, however, has received fully now and is expected to join Pakistan squad on May 22 along with Wahab. Pakistan’s first World Cup warm-up match takes place on May 24 against Afghanistan and both the players will be available for selection. Pakistan opens their World Cup campaign against West Indies on May 31 at Trent Bridge.