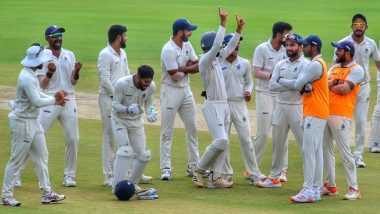 "Congratulations Madhya Pradesh on winning the #RanjiTrophy2022! We've witnessed some terrific performances throughout the season. Great efforts by everyone @BCCI for ensuring another successful Ranji season amidst the pandemic," Jay Shah tweeted. "Many congratulations to Madhya Pradesh on winning the Ranji Trophy. Great focus and dertermination to beat 41-time champion Mumbai. MP deserves all the laurels and glory, have some bright talent and this is truly a historic day for them," Sehwag tweeted. The win for Madhya Pradesh was so sweet that even MP Chief Minister Shivraj Singh Chouhan couldn't stop himself from lauding the exceptional performance of the side. Ranji Trophy 2021-22: Madhya Pradesh Clinch First Title; Defeat Mumbai by Six Wickets in Final.

Shivraj Singh Chouhan penned a congratulatory note for the Madhya Pradesh team on the Koo app. "We are the champions," he captioned the post. Meanwhile, former Indian spinner Pragyan Ojha also congratulated the side on maiden Ranji Trophy title win. "Congratulations team #MadhyaPradesh for winning the tournament and very well tried team #mumbai #RanjiTrophy2022," Ojha said on Koo app. The victory on Sunday is more precious as it come over Mumbai who had won the title 41 times and were the favourites coming into the summit clash.

(The above story first appeared on LatestLY on Jun 26, 2022 06:00 PM IST. For more news and updates on politics, world, sports, entertainment and lifestyle, log on to our website latestly.com).