Ravi Bopara Comes Up With a Hilarious Suggestion As PSL 2020 is Postponed, Here's Why England Cricketer Feels Multan Sultans Should be Handed the Trophy 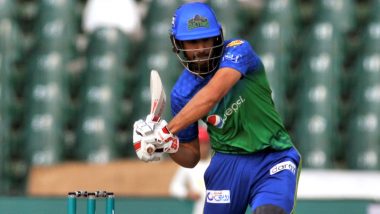 The coronavirus outbreak has paused many major cricket series and tournaments across the globe. Recently, Pakistan Cricket Board (PCB) were also forced to postpone the knock-out matches of Pakistan Super League (PSL) 2020. The T20 tournament isn’t expected to resume anytime soon. However, England all-rounder Ravi Bopara gave an interesting suggestion of why his side Multan Sultans should be declared champions. Taking to social media website Twitter, Bopara wrote: “As the elderly are more vulnerable to the Coronavirus it’s only fair the oldest average age team in the @thePSLt20 take the trophy.” PSL 2020 Semi-Finals and Final Postponed Amid Coronavirus Outbreak in Pakistan.

According to the World Health Organization (WHO), old-aged people and infants have more chances of getting infected by COVID-19 in comparison of the young people. Well, Bopara added his sense of humour with this fact and gave a hilarious suggestion. With the presence of players like, Shahid Afridi, Sohail Tanvir, Imran Tahir, Moeen Ali and even Bhopara himself, Sultans have most players ageing above 30 and the all-rounder was very well aware with this fact. Meanwhile, let’s look at Bhopara’s cheeky tweet.

As the elderly are more vulnerable to the Coronavirus it’s only fair the oldest average age team in the @thePSLt20 take the trophy. #PSL5 @MultanSultans

Despite not having many youngsters in the team, the Shan Masood –led side proved that age is just a number with its performance in the tournament. Clinching six games from 10 league-stage games, with two games being washed out, Sultans finished the round-robin stage at the top of the team standings with 14 points. They were also the front runners to clinch the trophy. However, the pandemic forced the tournament to take a pause and it will be interesting to see when the action will be resumed.

(The above story first appeared on LatestLY on Mar 18, 2020 02:14 PM IST. For more news and updates on politics, world, sports, entertainment and lifestyle, log on to our website latestly.com).