The IPL newcomers have taken the competition by storm and have easily been one of the most dominant sides this season. RCB do face a daunting task of outplaying the league leaders and ensuring a good net run rate at the same time and it would be interesting to see how they approach this must-win game. 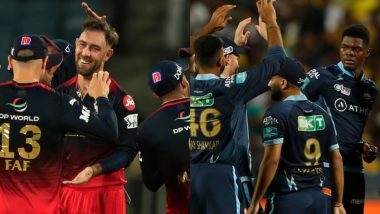 Royal Challengers Bangalore would head to their final league stage clash, against Gujarat Titans on May 19, Thursday, knowing that they have to be nothing short of their absolute best if they are to qualify for the top four. This is a do-or-die game for Faf du Plessis and his side, who are aiming to make it big this season. They have had a season full of ups and downs but now, it is time to consolidate all of that experience and put it to good use against one of the best teams in the tournament this season. A win might just not be enough as they need those two points with a good run rate, so that their net-run rate also improves, along with their chances of finishing top four. IPL 2022 Points Table Updated With NRR

For Gujarat though, this game would serve as a good preparation ahead of the first Qualifier. Having secured the top spot on the points table after a supremely dominant show against Chennai Super Kings. Hardik Pandya will hope his men carry on the same form and momentum that won them 10 games this season so far.

Those unable to watch the RCB vs GT match live on television can follow the game online. Disney+ Hotstar will be live streaming the Royal Challengers Bangalore vs Gujarat Titans match online for its fans in India. Fans, however, need to subscribe to Hotstar by paying a nominal subscription fee.

(The above story first appeared on LatestLY on May 19, 2022 02:31 PM IST. For more news and updates on politics, world, sports, entertainment and lifestyle, log on to our website latestly.com).