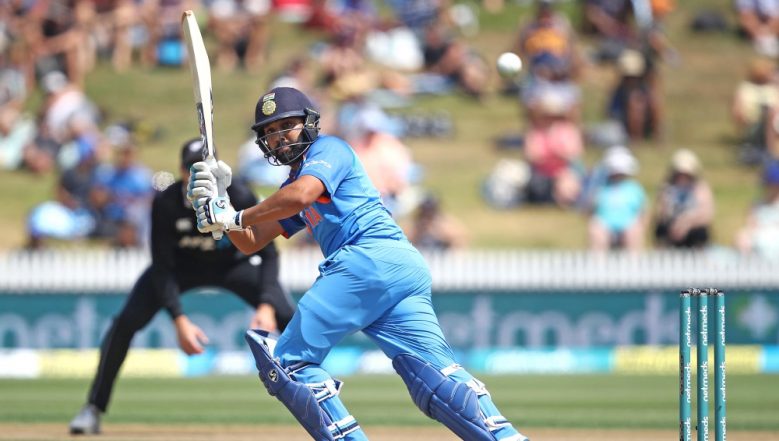 India has already registered a 4-1 victory against New Zealand and now are moving on the three-match T20I series which begins from today. Rohit Sharma will be leading the side in the absence of Virat Kohli. Now, the stand-in skipper is already on the verge of overhauling Virat Kohli’s captaincy record and is on the cusp of creating a couple of more. Rohit Sharma needs 36 runs to surpass Martin Guptill and become the highest scorer in the T20Is. He will also leave behind Pakistan’s Shoaib Malik who features on number two with 2245 runs in the T20Is. India vs New Zealand,1st T20I 2019: Check Out the Weather Forecast of Wellington As Men in Blue Gear up for Shorter Format.

Martin Guptill has 2272 runs in his kitty and stands on number one whereas Sharma stands on number three with 2237 runs. During the three-match T20I series, he has a chance to be the player who has hit the highest number of sixes in T20I. As of now, Rohit has hit 98 sixes, whereas Martin Guptill and Chris Gayle have 103 sixes under their belt. If the Indian opener manages to hit six sixes in the T20Is, this would add another feather to his hat. Since Martin Guptill has been ruled out the T20Is, it looks like Rohit can easily achieve the record. India vs New Zealand 1st T20I 2019 Match Preview: Men in Blue Aim to Carry ODI Momentum to the Shorter Format Against Black Caps.

Talking about the first T20I match, the game will be held in Wellington and the Indian team would look forward to carrying their momentum even in the shorter format of the game. Ahead of the first T20I, Shikhar Dhawan addressed the press and showered praises on wicket-keeper batsman Rishabh Pant and said he is an asset to the team. He also mentioned the T20I series is an ideal opportunity for the youngsters to book their berth for the ICC Cricket World Cup 2019.