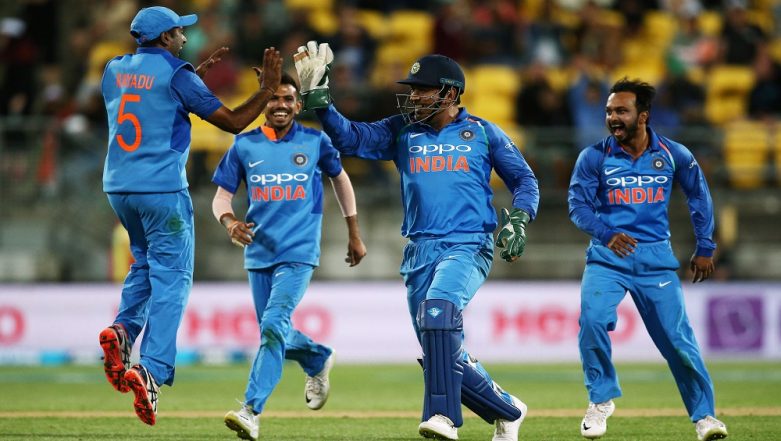 Wellington, February 5: After clinching the five match One-Day International (ODI) series, a confident India will aim to carry the momentum to the three match Twenty20 International (T20I) series when they face New Zealand in the opening match at the Westpac Stadium here on Wednesday. In the ODIs, India comprehensively outplayed the hosts to clinch the series 4-1. India looked out of sorts only in Hamilton but they bounced back in style in the last match and will aim to carry the momentum to the shortest format with some more promising players joining the squad.

"We would be looking to win the series and carry the momentum back home for the Australia series," Shikhar Dhawan told reporters on Tuesday. This T20I series will also be a good opportunity for youngsters like Krunal Pandya, Rishabh Pant, Siddarth Kaul, Khaleel Ahmed, Shubman Gill to rise to the occasion and stake a claim for a World Cup spot. India vs New Zealand 1st T20I Match Preview: Colin Munro Expected in Top Three, Says Skipper Kane Williamson.

Veteran India wicketkeeper-batsman Mahendra Singh Dhoni also returned to the T20I squad after a long hiatus. The Ranchi stumper last featured in a T20 match in July. In the absence of regular skipper Virat Kohli who has been rested, Rohit Sharma will lead the squad and will be aiming to repeat the result of the ODI series.

Apart from that, India's batting seemed settled with the likes of opener Shikhar Dhawan, swashbuckling batsman Rishabh Pant, Dinesh Karthik, Kedar Jadhav and Dhoni in the squad. In the bowling department, India will miss the services of pacer Jasprit Bumrah, who has also been rested. Pacer Bhuvneshwar Kumar will lead the pace attack which comprises of Mohammad Siraj, Siddarth Kaul, Khaleel Ahmed and all-rounder Hardik Pandya.

The spin department will consist of chinaman Kuldeep Yadav and Leg-spinner Yuzvendra Chahal. Part-time spinners Kedar Jadhav and Krunal Pandya might come into the picture as well. New Zealand, on the other hand, will miss the services of opener Martin Guptill. Failing to recover from a back injury, the experienced batsman was ruled out of the series.

Guptill had sustained the injury while throwing a ball during fielding practice on the eve of the fifth ODI after which he was forced to miss that contest. The Kiwi opener underwent a fitness test on Monday morning where he continued to feel pain in his lower back. Later, New Zealand coach Gary Stead confirmed that Guptill will miss the series.

Bowling all-rounder James Neesham, who was earlier left out of the T20I squad, has now been included as Guptill's replacement. A lot will depend on the top-four batsmen -- Kane Williamson, Doug Bracewell, Colin de Grandhomme and Lockie Ferguson. They need to click for New Zealand to have the upper hand. The middle-order consists of youngsters Scott Kuggeleijn and Daryl Mitchell. The duo will be supported by veteran batsman Ross Taylor.

In the bowling department, it will be interesting to see the performances of debutant all-rounder Daryl Mitchell and pacer Blair Tickner in the absence of star pacer Trent Boult, who has been rested. Spinners Ish Sodhi and Mitchell Santner have also been included in the squad.