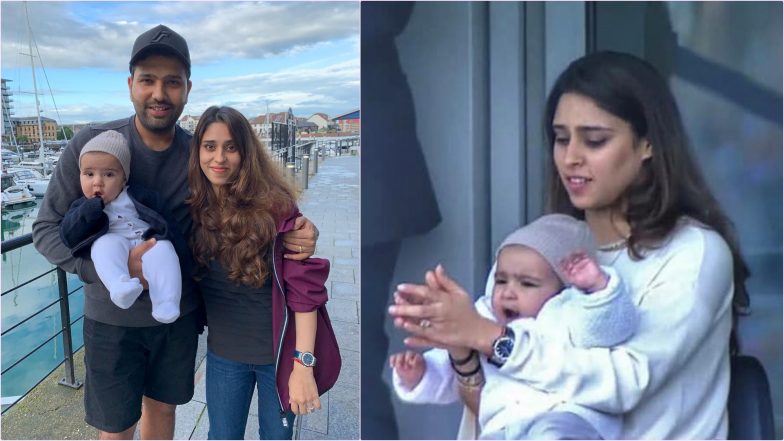 Team India opener Rohit Sharma, who became the first player to register five centuries in a single edition of the ICC Cricket World Cup 2019 on Saturday against Sri Lanka, had all eyes on him during his historic innings. However, there was someone special who was praying for Rohit "Hitman" Sharma along with all of India for the right-handed batsman to get to the landmark. And she is none other than his wife Ritika Sajdeh. India vs Sri Lanka Match Highlights, ICC World Cup 2019: IND Register Thumping Victory, Trounce SL by 7 Wickets.

Ritika and Rohit's daughter Samaira are a permanent during India's matches in the ICC Cricket World Cup 2019. Rohit's wife Ritika was seen praying for Rohit with "crossed fingers" for the batting star, in a picture that has gone viral after the opener himself shared the image on Twitter.

"Nothing can beat this, when your loved ones are up there in the stands rooting for you with fingers crossed 🤞," wrote Rohit in the caption to the picture.

Nothing can beat this, when your loved ones are up there in the stands rooting for you with fingers crossed 🤞 pic.twitter.com/xPZSvlDba5

Rohit Sharma has now become the highest run-scorer in this world cup. The right-handed batsman has 641 runs in the world cup so far. Since 2018, Rohit has hit 11 hundreds in the ODIs, more than any other player in the world. India captain Virat Kohli is number two with nine centuries and Australia's Aaron Finch is number three with seven hundreds in this period.