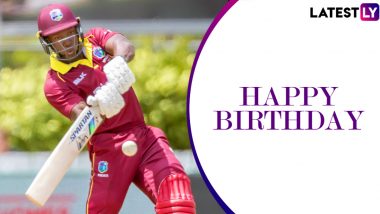 West Indies batsman Rovman Powell celebrates his 27th birthday on Thursday (July 23, 2020). Courtesy his big-hitting abilities, the right-handed batsman has made a lot of name for himself in the last couple of years. Powell can accumulate quick runs in the death overs, and the range of his shots makes the bowler’s job even more difficult. Although, Powell hasn’t been very consistent in international cricket but has showcased his abilities with the willow which makes him a great prospect for the future. Below, we’ll look at some of his best performances. CPL 2020: Pravin Tambe, 48, Signed up by TKR in Caribbean Premier League Players Draft.

Making his T20I debut in 2016, Powell didn’t take long in proving his mettle. He played a quick-fire knock against Sri Lanka in his maiden T20I innings and guided West Indies to an emphatic win. The right-handed batsman also got a break in the ODI team and he played some brilliant knocks there too. In fact, he played a key role in guiding the Men in Maroon to the finals ICC World Cup Qualifiers 2018. In Caribbean Premier League, he is a vital cog of Jamaica Tallawahs in the last few seasons.

101 Vs Ireland in Harare

Facing Ireland in the group-stage game of 2018 World Cup Qualifiers, West Indies were tottering at 5/83 and a great upset was set on the cards. However, Powell played a calculated knock and brilliantly rescued his side. After settling his feet in the initial overs, the dasher went after the Irish bowlers in the death overs and scored his maiden ODI hundred. Riding on his knock, West Indies won the game by 52 runs.

59 Vs New Zealand in Whangarei

West Indies were tottering at 134/5 in the first ODI against New Zealand in 2018 series. However, Powell came into bat at number seven and did the repair work. Facing the likes of Trent Boult and Tim Southee, the youngster just didn’t showcase great resilience but also scored runs at a rapid pace. He scored 59 off just 50 deliveries. However, his efforts weren’t enough as the Black Caps won the game by five wickets.

54 Vs India In Lauderhill

Another Rovman Powell special came in the 2nd match of 2019 T20I series between West Indies and India. After losing two quick wickets, the Caribbean side was on the backfoot but Powell wasn’t ready to put his guards down. He brilliantly tackled the in-form Indian bowlers and scored 54 off mere 34 balls. However, he didn’t get much supports from the other end as Virat Kohli and Co won the game by 22 runs.

(The above story first appeared on LatestLY on Jul 23, 2020 08:00 AM IST. For more news and updates on politics, world, sports, entertainment and lifestyle, log on to our website latestly.com).