S Sreesanth Recalls Being Kept in Terrorist Ward After Getting Arrested on Spot-Fixing Charges, Says ‘Felt I Was Being Made Bakra’ 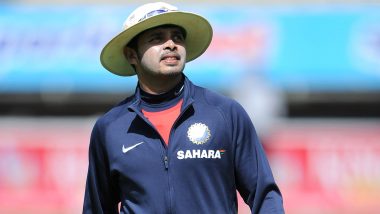 Veteran pacer S Sreesanth was once a vital cog India’s pace bowling attack in all the three formats of the game. However, he was accused of spot-fixing during the 2013 edition of the Indian Premier League (IPL) and his career came to a halt. The Kerela-born pacer was arrested on fixing charges and later, a lifetime ban was imposed on him which will eventually cut shortened to seven years. Sreesanth recently revealed that he was kept in a terrorist ward after getting arrested where he felt tortured for 16-17 for 12 straight days. IPL Update: Sreesanth Eyes Return, Says ‘Will Put My Name in 2021 Auctions if Performing Well.’

"If you look at my life, it was a fraction of second, it was the after-match party, I was taken to the terrorist ward, I felt I was being made ‘Bakra’. For 12 days, it was a torture for me for 16-17 hours per day. I was always thinking about my house and family at that time," Sreesanth told host Adarsh Raman during an Instagram live session.

The 37-year old further said that his family was the main motivation during his tenure in jail. "After a few days, my elder brother came to visit me and then I got to know that my family was fine. My family members motivated me and were really behind me. On a serious note, winning every battle is important, everyone is fighting their own battle. Even if Sachin Tendulkar scores century in a game, he will bat from zero in next game,” he added.

"Think for 10 seconds before you take any decision, you should know that ‘this too shall pass’. Just achieve whatever you want to achieve, don’t wait for what the world says," he further said.

The pacer will be eligible to play all forms of cricket from September 2020 and he still aims to make a comeback in the national team. However, with the current Indian bowling line-up packed with prominent pacers, it will be interesting to see whether the two-time World Cup winner can don the Indian jersey again or not.

(The above story first appeared on LatestLY on Jul 02, 2020 01:25 PM IST. For more news and updates on politics, world, sports, entertainment and lifestyle, log on to our website latestly.com).