Sakshi Rawat Reveals Post-Lockdown Plans With Husband MS Dhoni, Says ‘Mahi and I Have Planned to Hit the Hills’ 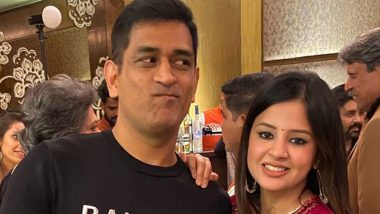 Former Indian captain MS Dhoni, who took a long sabbatical from cricket after 2019 World Cup, was set to make a comeback on the field in the 2020 edition of the Indian Premier League (IPL). However, just like many major cricket tournaments around the world, the T20 extravaganza also got postponed indefinitely. With this, the return of the talismanic wicket-keeper-batsman was also shifted and his future remained a hot topic of debate among the cricket fans. Recently, however, Dhoni’s wife Sakshi Rawat revealed the future plans of the couple if cricket matches don’t resume even after the coronavirus-induced lockdown. MS Dhoni Is Addicted to PUBG These Days, He Even Talks About It During His Sleep, Says Wife Sakshi.

Featuring in an Instagram live session on the Chennai Super Kings' (CSK) official handle, Sakshi revealed that the 2011-World Cup-winning captain and she will go the hills if future of the games remains uncertain post lockdown. "If there is no cricket post lockdown then Mahi and I have planned to hit the hills, go to Uttarakhand. Stay in a small village or something, do some trekking," said Sakshi.

Talking about how the Dhoni family keeps themselves busy during isolation, Sakshi said: "Mahi has 9 bikes. He opened them up, he bought parts and assembled them. He was assembling a bike and fully assembled it and he forgot to put one part and the next day he had to open the bike and he had to do it all over again.”

According to several reports, IPL 2020 could take place in October-November as the ICC T20 World Cup 2020 is likely to be pushed to 2020. Also, the ‘lockdown 5.0’ focuses on the on resuming international air travel and sports events which is certainly a massive boost for the cash-rich league.

(The above story first appeared on LatestLY on Jun 01, 2020 08:37 AM IST. For more news and updates on politics, world, sports, entertainment and lifestyle, log on to our website latestly.com).