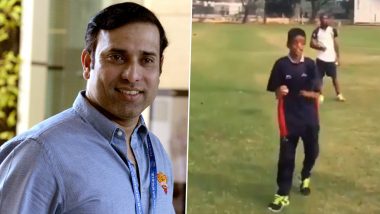 Former Indian batsman VVS Laxman was astonished when he came across a video of a specially-abled child giving it all while bowling at nets. Despite not having proper hands, the kid can be seen defying all the odds and bowling a perfect length. Laxman, who served Indian cricket for 16 years, lauded the efforts of the kid while sharing the video of the child in his official Twitter page and. In the clip shared by the former batting great, the kid can be deceiving a batsman during a net session. Laxman heaped praises on the kid and saluted his endurance and strength. Sachin Tendulkar Tweets Video of Specially-Abled Child Playing Cricket And This Spirited Act Warms Master Blaster's Heart!

“The human spirit is one of ability, perseverance and courage that no situation can steal away. Salute to the spirit of human endurance and strength,” wrote the cricketer-turned commentator on the micro-blogging website. Have a look at the video.

The human spirit is one of ability, perseverance and courage that no situation can steal away. Salute to the spirit of human endurance and strength 🙏 pic.twitter.com/Y9im5mWJDm

On the occasion of New Year 2020, Laxman’s former teammate Sachin Tendulkar also shared a similar sort of video in which a specially-abled kid was seen playing shots and leaving no stones unturned while running between the wickets. Well, all these cricket stars might have bid adieu to the game. However, their love for cricket certainly can’t get over.

Meanwhile, the Board of Control for Cricket in India (BCCI) is planning to resume the training session of Indian Cricket Team at National Cricket Academy (NCA) in Bengaluru. However, the likes of Virat Kohli, Rohit Sharma and Ajinkya Rahane are like to remain stranded in Mumbai as their city comes under the most affected region in India.

(The above story first appeared on LatestLY on May 24, 2020 05:12 PM IST. For more news and updates on politics, world, sports, entertainment and lifestyle, log on to our website latestly.com).