Scotland's George Munsey and Oman's Ayaan Khan have been found guilty of breaching the ICC Code of Conduct after their heated exchange in the ICC Cricket World Cup League 2. 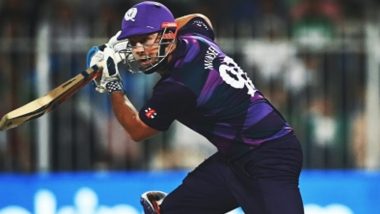 Dubai, April 19 : Scotland's George Munsey and Oman's Ayaan Khan have been found guilty of breaching the ICC Code of Conduct after their heated exchange in the ICC Cricket World Cup League 2. After dismissing Munsey in the 31st over during Scotland's successful chase of 226, Ayaan and Munsey exchanged words in the middle, before Munsey made contact with the Oman all-rounder, leading to further argument. IPL 2022: Lasith Malinga Praises Yuzvendra Chahal for His Game-changing Spell Against Kolkata Knight Riders.

As a result of the incident, Ayaan and Munsey were found to have breached Level 1 of the ICC Code of Conduct, and fined 15 and 25 per cent of their match fees respectively. According to ICC, "Khan breached Article 2.5, relating to using language, actions or gestures which disparage or which could provoke an aggressive reaction from a batter upon his/her dismissal, while Munsey was found to have breached Article 2.12 of the Code, relating to using inappropriate physical contact with a Player, Player Support Personnel, Umpire, Match Referee or any other person (including a spectator)."

The two players also have one demerit point added to their disciplinary records. It's Ayaan's first offence, while it's the second for the Scottish left-hander. Should a player reach four or more demerit points within a 24-month period, they are converted into suspension points, and will result in a ban of the player from international matches. IPL 2022: COVID-Hit Delhi Capitals’ Match Against Punjab To Be Played in Mumbai Instead of Pune.

Two suspension points equate to a ban from one Test or two ODIs or two T20Is, whichever comes first for the player. On-field umpires Akbar Ali and Rashid Riaz, and third umpire Buddhi Pradhan, levelled the charges. The pair admitted to the offences and accepted the sanctions avoiding a formal hearing.

(The above story first appeared on LatestLY on Apr 19, 2022 03:05 PM IST. For more news and updates on politics, world, sports, entertainment and lifestyle, log on to our website latestly.com).