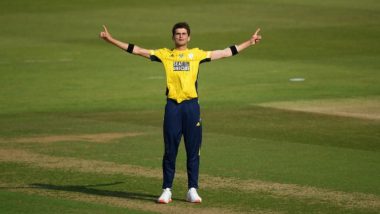 Shaheen Afridi produced an outstanding spell of fast-bowling as he picked a hat-trick during Hampshire vs Middlesex Vitality T20 Blast 2020. Afridi scalped four wickets in four balls to power Hampshire to a 20-run victory. Middlesex needed 23 off 18 balls with four wickets in hand when Afridi was handed the 18th over. After giving away two singles, Afridi picked four wickets on four balls to help his side win. He bowled all four batsmen to finish with figures of 6/19. Shoaib Akhtar Takes a Dig at Sourav Ganguly After BCCI President Blurs Hoarding of Pakistan Cricketers During Sharjah Visit, Rawalpindi Express Posts Photo With MS Dhoni.

Set a target of 142 runs to win, Middlesex were bundled out for 121 in 18 overs. Apart from Afridi’s six wickets, Felix Organ picked two wickets while Ryan Stevenson and MS Crane chipped in with one wicket each. For Middlesex, John Simpson was the top-scorer as he scored 48 off 40 balls.

Earlier, batting first Hampshire managed to post a decent target after Ryan Stevenson’s cameo towards the end. He scored 15 off just nine balls to provide his side with a much-needed impetus. Sam Northeast was top-scorer for Hampshire with 31 runs.

(The above story first appeared on LatestLY on Sep 20, 2020 09:27 PM IST. For more news and updates on politics, world, sports, entertainment and lifestyle, log on to our website latestly.com).