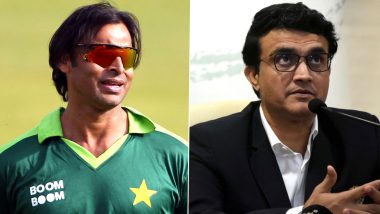 Shoaib Akhtar has taken a dig at BCCI president Sourav Ganguly after the former Indian skipper blurred a hoarding containing pictures of Pakistan players from his photo during a recent visit to the famous cricket Stadium in Sharjah. The BCCI president travelled to UAE ahead of the Indian Premier League 2020, which is currently being held in the Gulf country after being shifted there following the rise of coronavirus cases in India. Sourav Ganguly Shares Picture from Sharjah Cricket Stadium Ahead of IPL 2020, Blurs Hoarding of Pakistan Cricketers in the Background (See Pics).

Sourav Ganguly, the current president of BCCI, is in UAE as IPL 2020 is taking place in its entirety in the gulf country. And on his recent visit to the Sharjah Stadium, which will host games in the cash-rich league, Ganguly shared a photo but blurred Pakistan cricketers’ picture on a billboard in the background. The hoarding had images of players such as Rashid Latif, Javed Miandad, Misbah Ul-Haq and many others. BCCI, Emirates Cricket Board Sign MoU and Hosting Agreement to Boost Cricket Between India-UAE.

Following Sourav Ganguly’s post, Shoaib Akhtar took a dig at the former Indian skipper by sharing a distinct image of him and world-cup winning Indian captain MS Dhoni. 'Our memories are not 'blurred', nor our pictures ;), Trying to hit sixes while Captain Cool looks on' Akhtar captioned his post.

Our memories are not 'blurred', nor our pictures ;)

The two cricketing teams have not faced each other in a bilateral series in more than a decade and don’t need a second invitation to take a dig at each other. There are no players from Pakistan playing in the IPL as well with the inaugural 2008 edition being the only exception, where 11 players from the country represented various franchises.

Sharjah is one of the three venues hosting IPL 2020 matches in UAE with Abu Dhabi and Dubai being the other two. Ganguly reached the gulf country earlier last week and after a mandatory quarantine period headed for a tour of Sharjah cricket stadium.

(The above story first appeared on LatestLY on Sep 20, 2020 11:52 AM IST. For more news and updates on politics, world, sports, entertainment and lifestyle, log on to our website latestly.com).