Shoaib Akhtar Talks About Virat Kohli, Says ‘We Would Have Been Best Enemies on the Field’ 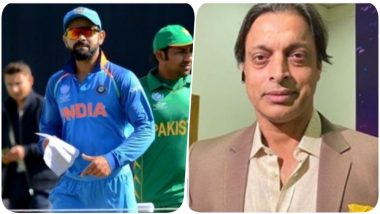 Very often the former Pakistani pacer Shoaib Akhtar has been in the news for his comments. The Rawalpindi Express is known to speak his mind and frequently he has been trolled by the netizens for the same. This time he has spoken about the Indian cricket captain Virat Kohli and said that if he had been playing currently, then he would have been playing on this date, then he would have been friends with him off the field. They would have been friends with each other despite the fact that Virat is his junior. But, on the field, they would have been enemies. According to Akhtar, the two are quite similar when it comes to their temperament and both are Punjabis. Shoaib Akhtar Reveals Plan to Dismiss Virat Kohli, Says ‘Make Him Drive’.

Both the cricketers had faced each other during the Asia Cup in 2010 in Dambulla, Sri Lanka. Virat slammed the Rawalpindi Express with 27 runs from 18 balls and the bowler was removed from the batting. The sport has given us some epic battles like Sachin Tendulkar and Wasim Akram, Shoaib Akhtar vs Tendulkar, Rahul Dravid vs Akhtar, Virender Sehwag vs Saqlain Mushtaq, Sohail Abbas vs Venketeshwar Prasad and surely the war between Virat Kohli and Shoaib Akhtar would have been an intense one.

(The above story first appeared on LatestLY on May 24, 2020 04:39 PM IST. For more news and updates on politics, world, sports, entertainment and lifestyle, log on to our website latestly.com).