Harmanpreet Kaur and her side will aim to keep their winning momentum going as they aim for a series win. Sri Lanka on the other hand would fight to keep the series alive. 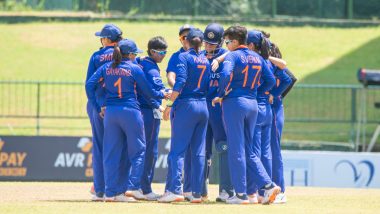 After a victory in the first ODI, the Indian women's team will now eye a series win when they take on hosts Sri Lanka in the 2nd ODI on Monday, July 4. The match would be played at the Pallekele International Cricket Stadium in Pallekele and is scheduled to get underway at 10:00 am IST (Indian Standard Time). It was the bowlers, who starred as Harmanpreet Kaur's side took a series lead. Deepti Sharma (3/25) and Renuka Singh (3/29) were the wreckers-in-chief as Sri Lanka were restricted to 171 in 48.2 overs. In response, India got the runs in 38 overs with skipper Kaur top-scoring with 44 runs. Despite the win, India would still be worried about their batting performance, which had the team reduced to 61/3 at one point in time. SL W vs IND W Dream11 Team Prediction: Tips To Pick Best Fantasy Playing XI for Sri Lanka Women vs India Women 2nd ODI 2022 in Pallekele

Sri Lanka on the other hand, will fight to stay alive in the series. After going down in the T20Is, they would be eager on showing some fight to make things 1-1. The hosts would aim to have an improved batting show in the second game. On the other hand, their bowling attack has been in form and Chamari Athpaththu will be keen on having her bowlers repeat a similar performance.

India and Sri Lanka have met a total of 30 times in Women's ODIs. Out of the 30 matches, India have secured 27 wins, losing only two. One match ended in a no result.

The duel involving Indian skipper Harmanpreet Kaur and Inoka Ranaweera would be an interesting one. The clash between Sri Lanka captain Chamari Athapaththu and Deepti Sharma too can have a say in the outcome of this game.

Sri Lanka W vs India W 2nd ODI match will be played at the Pallekele International Cricket Stadium in Pallekele on July 04, 2022 (Monday). The 2nd ODI is scheduled to begin at 10:00 am IST (Indian Standard Time). Toss will be held at 09:30 am.

Unfortunately, there are no official broadcasters yet for the India Women's tour of Sri Lanka. But the good news for Indian fans is that FanCode would provide live streaming of the series on their app for free.

(The above story first appeared on LatestLY on Jul 03, 2022 09:27 PM IST. For more news and updates on politics, world, sports, entertainment and lifestyle, log on to our website latestly.com).