SRH vs RR IPL 2020 Dream11 Team: Jonny Bairstow, Jofra Archer and Other Key Players You Must Pick in Your Fantasy Playing XI

Both teams haven’t enjoyed a sensational run in the tournament and will be raring to get a victory under their belt. After winning the first two encounters, Steve Smith’s RR lost the plot entirely and faced defeats in their next four games. 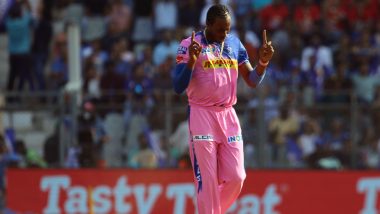 Sunrisers Hyderabad will meet Rajasthan Rajasthan Royals in the Match 26 of the Dream11 Indian Premier League (IPL) 2020. The encounter takes place at the Dubai International Cricket Stadium on October 11 (Sunday). Both teams haven’t enjoyed a sensational run in the tournament and will be raring to get a victory under their belt. After winning the first two encounters, Steve Smith’s RR lost the plot entirely and faced defeats in their next four games. On the other hand, SRH had a mediocre campaign as they lost three of their first six games and are placed at the third position in the team standings. SRH vs RR Preview: 7 Things You Need to Know About Dream11 IPL 2020 Match 26.

The three-time Orange Cap winner hasn’t set IPL 2020 on fire yet but has given SRH good starts on many occasions. He’s also scored a half-century in his last outing and excluding him from your Dream11 team will not be wise. Also, he holds a good record against RR and will be determined to play a match-winning knock.

Fresh from a 97-run knock against Kings XI Punjab, Bairstow is in sensational form and deserves a place in your Dream11 team. The England wicket-keeper batsman has a rich experience of facing RR’s pace spearhead Jofra Archer in the nets and fans must be aware of the fact. Also, his dismissals behind the stumps will fetch you extra points.

After failing to impress in the first couple of games, the Afghanistan leg-spinner came back to his prime and played delivered one staggering spell after another. The T20 superstar has kept the scoring rate down in the middle overs, and his knack of taking wickets makes him a captain’s delight. Fans should also not forget Rashid’s hitting ability lower down the order while picking their fantasy team.

Many believed that the southpaw’s blitzes against Kings XI Punjab were just a mere fluke. However, Tewatia proved his critics wrong with consistent performances. His big striking in end overs has rescued the Men in Pink on multiple occasions while his economical bowling has hurt the opposition too. All these factors make Tewatia a must-pick in your fantasy side.

Archer has literally breathed fire with the ball in the ongoing tournament. Be it swinging the ball in the initial overs or tormenting batsmen in the end overs, the England star rose to every challenge which came his way. Archer’s batting prowess is also worth mentioning as he has smashed sixes for fun.

As SRH are coming off a 69-run triumph against Kings XI Punjab, they will indeed take the field as favourites. However, Ben Stokes is likely to feature in RR’s line-up in the upcoming game which will definitely boost up the morale of the Men in Pink.

(The above story first appeared on LatestLY on Oct 10, 2020 05:58 PM IST. For more news and updates on politics, world, sports, entertainment and lifestyle, log on to our website latestly.com).