The right-hander smashed a half-century in an innings where most of the Indian batsmen struggled to make a mark. He has been consistently performing for the national team in this ongoing tour of Sri Lanka. 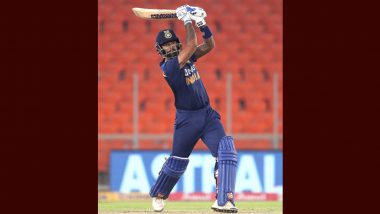 Young batsman Suryakumar Yadav has been the find for the Indian team in their ongoing tour of Sri Lanka. Having waited patiently for his opportunity to come, the Mumbai batsman has made full use of it and now, he finds himself to be one the key members of the Indian outfit in Sri Lanka. On Sunday in the first T20I against Sri Lanka, Suryakumar Yadav proved why he is such an important asset to the national team by scoring an important 50 off 34 balls as India eventually ended up with 164/5 in their first innings. Hardik Pandya Spotted Singing Sri Lankan National Anthem Ahead of IND vs SL 1st T20I (Watch Video)

Yadav was named Man of the Series in his debut ODI series against Sri Lanka earlier in the tour and now that he has started off the T20Is with a bang, it would be no surprise if he once again wins the award, provided he maintains his consistency. After his classy innings, fans took to Twitter to praise him for his effort. Here are some reactions:

It's never late to show how talented you are .

Fans:: Wish India had someone like AB de Villiers.

The three C's of success:

When #SuryakumarYadav is on the field.

Although it is still early, but Suryakumar Yadav is making a strong case for himself to be included in India's scheme of things for the T20 World Cup this year.

(The above story first appeared on LatestLY on Jul 25, 2021 11:52 PM IST. For more news and updates on politics, world, sports, entertainment and lifestyle, log on to our website latestly.com).