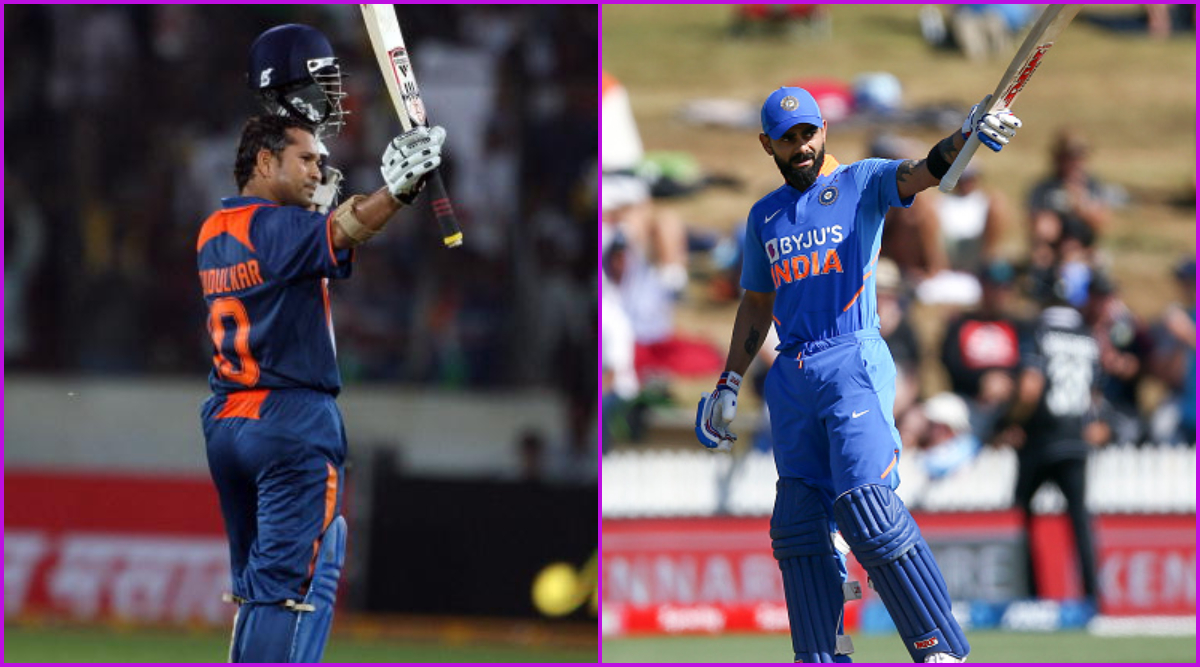 Cricket fans often end up comparing Virat Kohli to Sachin Tendulkar and rightly so. Tendulkar is the benchmark for batsmen when it comes to records as the legendary cricketer has plenty of them against his name. And if there is one batsman who could break records set by Tendulkar, he is Kohli. The right-handed batsman is considered one of the greats in contemporary cricket and has stamped his authority across formats. However, in One-Day Internationals (ODI), Kohli has been at his absolute best. Sachin Tendulkar or Virat Kohli: Wasim Jaffer Shares Funny Meme As Fan Asks to Choose Between the Two Legends.

The current Indian captain is tipped to break Tendulkar’s record and the way he is going that day won’t be far when he will own most of the records. Kohli has already broken some of the Tendulkar records and is on his way to break more. With cricket activities suspended, it could now take Kohli some more time to break some of Tendulkar’s records. But he is close to breaking few once the cricket action resumes, hopefully, after the coronavirus pandemic outbreak. Let’s take a look at some Tendulkar records, Kohli could break in the near future.

Most ODI Centuries: Tendulkar holds the record of most number of centuries in ODIs. The former cricketer in 463 ODIs notched 49 centuries. Kohli is just seven tons away from breaking this Tendulkar record, and he has played just 248 matches. The Indian skipper has a good chance of surpassing Tendulkar. From Joginder Sharma, MS Dhoni to Kapil Dev: A Look at Some Cricketers Who Served As Government Officials in Honorary and Professional Capability

Fastest to 12,000 ODI Runs: Tendulkar is the fastest batsman to score 12,000 runs in ODIs. The former captain reached the milestone in 300 innings while former Australia captain Ricky Ponting is second on the list as he read the 12k mark in 314 innings. Kohli is just 133 runs away from reaching the 12000-run mark and has featured in 239 innings. Given Kohli’s consistency, the right-hander could score the required runs in only three-four innings.

Most ODI Centuries At Home: In India, Tendulkar has featured in 164 matches and has scored 20 centuries in front of the home crowd. Kohli, on the other hand, is just two centuries away from breaking Tendulkar’s record as the Indian captain has slammed 19 tons while playing at home.