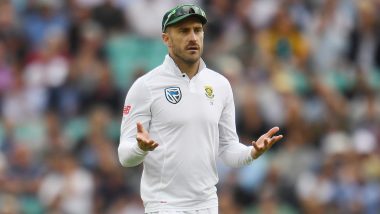 Born on July 13, 1984, Faf Du Plessis is one of the most prolific batsmen produced by the South African Cricket. The right-handed middle-order batsman Du Plessis has played in South African domestic cricket for Northerns-Titans, Lancashire. He is also popular for in India while playing in the Indian Premier League (IPL) for the Chennai Super Kings (CSK) currently. A few years ago, he had also played for the Rising Pune Supergiants (RPS). Faf has proven his mettle in all formats of the game and very often has entertained the fans with his class acts.  On his 36th birthday, let's have a look at five of his best performances so far by the South African captain. Faf du Plessis Under Scanner for Making ‘Physical Contact’ With Jos Buttler During South Africa vs England 4th Test 2020.

This is was his debut match against India way back in 2011 which turned out to be quite a memorable one. Hosted at the backyard of the South Africans in Cape Town, Faf du Plessis scored an unbeaten knock of 60 runs. However, his innings could not save the South African side as India won the match with a couple of wickets to spare.

Faf du Plessis made his test debut against Australia. Hosted at the Adelaide, Faf du Plessis stood tall in adversity. The team was on the verge of losing the match. But Faf du Plessis vital knock of 188 runs saved the team from facing a defeat and the match ended as a draw. Faf was adjudged as the match of the Man of the Match.

in the following test in the same year, once again, Faf came in handy proving his prowess in the longer format. His resilient knock of 78 runs against Australia in Perth. The match ended with a draw one again and Faf's innings were praised.

As mentioned above, Faf proved his mettle even in the T20. One of his most memorable innings was when he played for the IPL franchisee Rising Pune Super Giants. The South African batsman scored a great knock of 69 runs against the Gujarat Lions. However, this couldn't save his team from losing the match.

This time in IPL 2018 he played for the  Chennai Super Kings and once again played an impressive knock of 67 unbeaten against the Sunrisers Hyderabad. Thus led MS Dhoni's team into the finals of the megaevent.

That's all we have in this article. If you think that we have missed out on any of your favourite innings, feel free to drop your comments below. Coming back to the birthday of Faf du Plessis, the entire team of LatestLY.com wishes him a very Happy Birthday!

(The above story first appeared on LatestLY on Jul 13, 2020 10:00 AM IST. For more news and updates on politics, world, sports, entertainment and lifestyle, log on to our website latestly.com).