India's Murali Vijay struck a fine century in a dream county debut, guiding Essex to a comfortable eight-wicket victory over Nottinghamshire in a Specsavers County Championship Division One match at Trent Bridge Thursday. 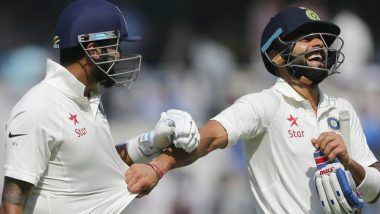 Murali Vijay scored exactly 100 from 181 balls and shared a second-wicket stand of 204 with Tom Westley, who finished with an unbeaten 110. Set 282 to win, the visitors reached their target just before lunch to complete a convincing win. The Chennai-born right-hander had earlier scored a half-century in his debut innings.

Vijay's feat matched that of South African Hashim Amla, who scored 181 against Glamorgan in 2009, as the last Essex batsman to score a century on his county debut.

The 34-year-old Vijay, who struggled in the just-concluded Test series against England before being dropped from the India squad, was eventually bowled off an inside edge by Samit Patel, with 61 required for victory. This was Essex's fifth victory of the championship this season.

(This is an unedited and auto-generated story from Syndicated Newsfeed, LatestLY Staff may not have modified or edited the content body)