Indian Cricket Team faced massive trolling online after losing the second ODI against Australia by 51 runs. With this, they also lost the three-match series 0-3 – making the final game a dead rubber. Chasing a mountain of 390 runs, the visitors looked in the contest for the majority of the game. They, however, eventually were restricted to 337/9. 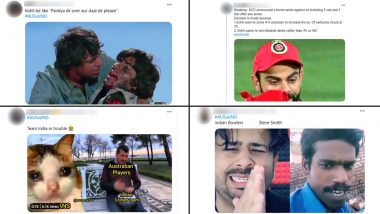 Indian Cricket Team faced massive trolling online after losing the second ODI against Australia by 51 runs. With this, they also lost the three-match series 0-3 – making the final game a dead rubber. Chasing a mountain of 390 runs, the visitors looked in the contest for the majority of the game. While Mayank Agarwal, Shikhar Dhawan and Shreyas Iyer played significant knocks, Virat Kohli and KL Rahul scored impressive half-centuries. However, they tumbled under pressure with the required run rate mounting up constantly. They eventually were restricted to 337/9, not losing just the match but series as well. India vs Australia 2nd ODI 2020 Highlights.

Earlier in the match, Australia won the toss and elected to bat first at the Sydney Cricket Ground. Openers David Warner and Aaron Finch continued their stellar form and aggregated 142 runs for the first wicket with both of them scoring half-centuries. The baton was passed onto Steve Smith and Marnus Labuschagne who carry forwarded the momentum brilliantly. The latter scored his second hundred and set an excellent platform for the death overs. The final flourishes were provided by Glenn Maxwell who scored 63 off 29 balls as the home team posted a gigantic total of 389/4. Virat Kohli’s couldn’t chase the target and eventually lost the series 0-2. Fans were indeed not impressed by India’s performance as the players faced massive criticism on social media. Have a look at how they reacted! Virat Kohli Misses Century During India vs Australia 2nd ODI 2020.'

The two Indian cricketers who looked confident in this series. #AUSvsIND pic.twitter.com/gvfIaKH0SI

Who else is missing those days when Dhoni used to captain India.

Rohit,Dhawan,Virat kohli were chasing 350+ in every match..

No Ego clashes no fights 😭😭. pic.twitter.com/jA7a5xWvJ1

when his when his

KL Rahul behind the stumps watching Maxwell play like this-

This Was On The Cards!!

Finch, Smith and Maxwell showing exactly what they are capable of but couldn't do the same for IPL. Surprisingly Stoinis got golden duck #AUSvsIND IPL story if them summed up: pic.twitter.com/Ec3s0GaLq3

If India won : It's virat captaincy

Notably, this was India’s second successive ODI series defeat. Earlier this year, they lost to New Zealand 0-3 in February. However, they’ll not want to face yet another white-wash by losing the third and last ODI. On the other hand, Australia must be eyeing to register a clean sweep. The final ODI takes place at the Manuka Oval in Canberra on December 2.

(The above story first appeared on LatestLY on Nov 29, 2020 05:18 PM IST. For more news and updates on politics, world, sports, entertainment and lifestyle, log on to our website latestly.com).