Virat Kohli’s Fan Following Reaches Another Level! Fan Carves Indian Captain’s Face on Back of His Head; Check Out the Viral Hairstyle 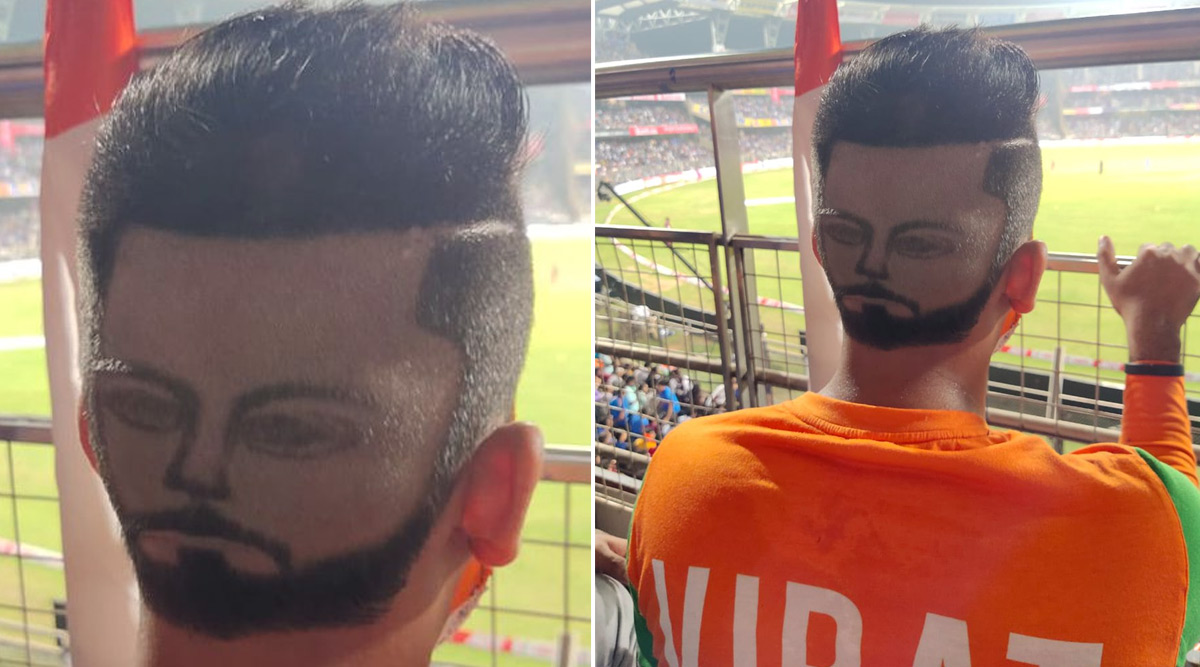 Indian skipper Virat Kohli is arguably the best batsman to have ever graced the game and his fan following his massive too. From his remarkable fitness transformation to his aggressive approach in the field, the number-one ranked Test and ODI has inspired his followers in many ways and as a result, his supporters come out in big numbers. However, one of his adherent, Chirag Khilare, reached another level of fandom as he was seen with a quirky hairstyle during the 1st India vs Australia ODI in Mumbai. The guy has carved out the face of Kohli on the back of his head. India vs Australia, Highlights And Cricket Score 1st ODI Match.

The picture didn’t take not getting viral and the fan received a lot of praises. Chirag, himself, shared the snap of his hairstyle on Twitter, captioning it “The best @imVkohliFrom heart to head #viratianchirag.” "For many years now, I have been following Virat in every match in India and have been a fan of him since he became the captain of the Under-19 team," Khilare was quoted as saying by news agency ANI. The fan also revealed that it about six to eight hours to get his tattoo done. Virat Kohli Wins 2019 Spirit Of Cricket Award.

The Indian skipper millions of fans but Khilare is certainly one of a kind and meeting Virat Kohli is his ultimate dream. He, however, had seen glimpses of the batsman but hasn’t got the chance to meet him yet. "My dream is to meet Kohli and when I will meet him, I will first touch his feet and hug him and capture that moment through a photograph," he added.

Well, Khilare and many other ‘Viratians’ were not able to see a significant show in the first ODI as the 31-year old could score only 16 runs. In fact, majority of Indian batsmen struggled in the opening encounter and were bundled out for 255 runs in the first innings. In reply, openers David Warner and Aaron Finch mustered centuries and guided Australia to a 10-wicket triumph.

The visitors have also taken a 1-0 lead in the three-match series and will eye to seal the deal in the next game. On the other hand, the upcoming game will be a do or die encounter for Virat Kohli and Co to stay alive in the series. The second ODI will be played on January 17 at the Saurashtra Cricket Association Stadium in Rajkot.