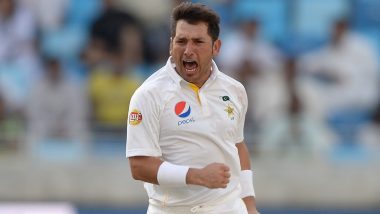 Karachi, July 22: Former Pakistan cricketer Iqbal Qasim feels spinner Yasir Shah can play a match-winning role in the team's upcoming Test series against England in August. Pakistan have been in England for a while now and have been acclimatising with the conditions. The players recently also took part in an intra-squad practice match to gear themselves up for the series.

Qasim feels Yasir will play a key role in the outcome of the Test series and much will depend on his form and preparation going into the Tests. "Yasir Shah can play an important and match-winning role for Pakistan in the Test series. Right-arm leg-spinners usually do well in England," Qasim, who featured in 50 Tests and 15 ODIs, was quoted as saying by Cricket Pakistan. Yasir Shah Tweets About His Well-Being After Rumours of His Death Surface on Social Media, Sends Thoughts & Prayers to Departed Due To PIA Plane Crash.

"Abdul Qadir was very successful in England. Mushtaq (Ahmed) and Danish Kaneria also performed well over there. So Yasir has the potential to cause difficulty to England batsmen. "Now it all depends on his form and preparations. He has gotten considerable time for practice, so that will benefit him," he added.

Yasir had earlier revealed that he has been working a lot on his googlies and will look to trouble the hosts with his 'most important weapon' in the series. "My googly is coming out well," Yasir was quoted as saying by ICC earlier this month. "In the two-day match, all the googlies I bowled landed well and spun well. I think it will be my most important weapon.

"Counties usually sign spinners for July to September because in these three months, spinners get help on dry wickets," he added. Pakistan are scheduled to play three Tests and as many T20Is after the completion of West Indies' ongoing #raisethebat Test series against England.

(The above story first appeared on LatestLY on Jul 22, 2020 11:01 PM IST. For more news and updates on politics, world, sports, entertainment and lifestyle, log on to our website latestly.com).