Cristiano Ronaldo and Girlfriend Georgina Rodriguez Dazzle Together at CR7 Fragrance Launch; Check Out Cute Pics of the Adorable Couple

Cristiano Ronaldo and Georgina Rodriguez are said to have met for the first time at a Gucci store in Spain, where Georgina, 25, worked as a shop assistant. The meeting followed another interaction at a brand event on the next day, which according to Georgina was the start of their three-years - and running - relationship. 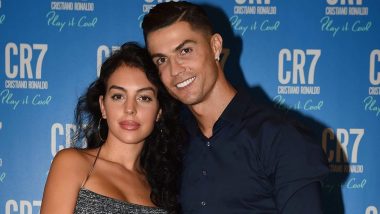 Cristiano Ronaldo and girlfriend Georgina Rodriguez looked picture perfect as they posed together at the launch of the footballer’s new CR7 fragrance ‘Play It Cool’ in Turin, Italy. Ronaldo and his long-time girlfriend Georgina attended the launch party with few friends and the couple looked inseparable as they posed for pictures together. Georgina, who is dating Ronaldo since 2016 and is rumoured to tie-the-knot soon with the Juventus player, showed complete support for her beau. The new aftershave added to Ronaldo ever-growing CR7 brand, which also includes clothing, underwear and fragrance. Cristiano Ronaldo Salary Contract Revealed: Juventus Football Star Earns €31 Million Per Year, Three Times More Than Second-Highest Serie A Player.

Ronaldo looked elegant in a fitting black shirt and white jeans, while Georgina was nothing short of sensational in her skin-tight grey dress that had spaghetti straps and a plunging neckline. Georgina, a former shop assistant, had earlier confessed that it was “love at first sight” for both of them. 'Being the partner of someone so famous is not easy but I would not change it for the world,” she told The Sun on the sidelines of the CR7 fragrance launching event. Cristiano Ronaldo & Neymar Indulge in Sword Fighting While Wearing Period Dress (Watch Video).

The couple is said to have met for the first time at a Gucci store in Spain, where Georgina, 25, worked as a shop assistant. The meeting followed another interaction at a brand event on the next day, which according to Georgina was the start of their three-years - and running - relationship. "Smelling good with my new fragrance and looking great with you on my side," Ronaldo captioned the image in which he is seen with Georgina.

I’m ready to Play It Cool! Are you?😉 #CR7PlayItCool

Cristiano Ronaldo And Play It Cool

Find out how my day went from bad to good at cristianoronaldo.com/#playitcool with my new CR7 Play it Cool Fragance and stay tuned on @cr7cristianoronaldo

Meanwhile, the five-time Ballon d'Or winner has had a great start to his career in Italy. Ronaldo, who in recent times lifted the Euro Cup and Nations League Trophy with Portugal, scored 28 goals in his debut season with Juventus in Serie A. That couldn't, however, help the Portuguese star in landing a trophy at the Champions League Awards but he has been shortlisted as one of the top three - alongside Lionel Messi and Virgil van Dijk - nominees for the upcoming FIFA Club Awards for 2018/19 season.

(The above story first appeared on LatestLY on Sep 13, 2019 11:59 PM IST. For more news and updates on politics, world, sports, entertainment and lifestyle, log on to our website latestly.com).