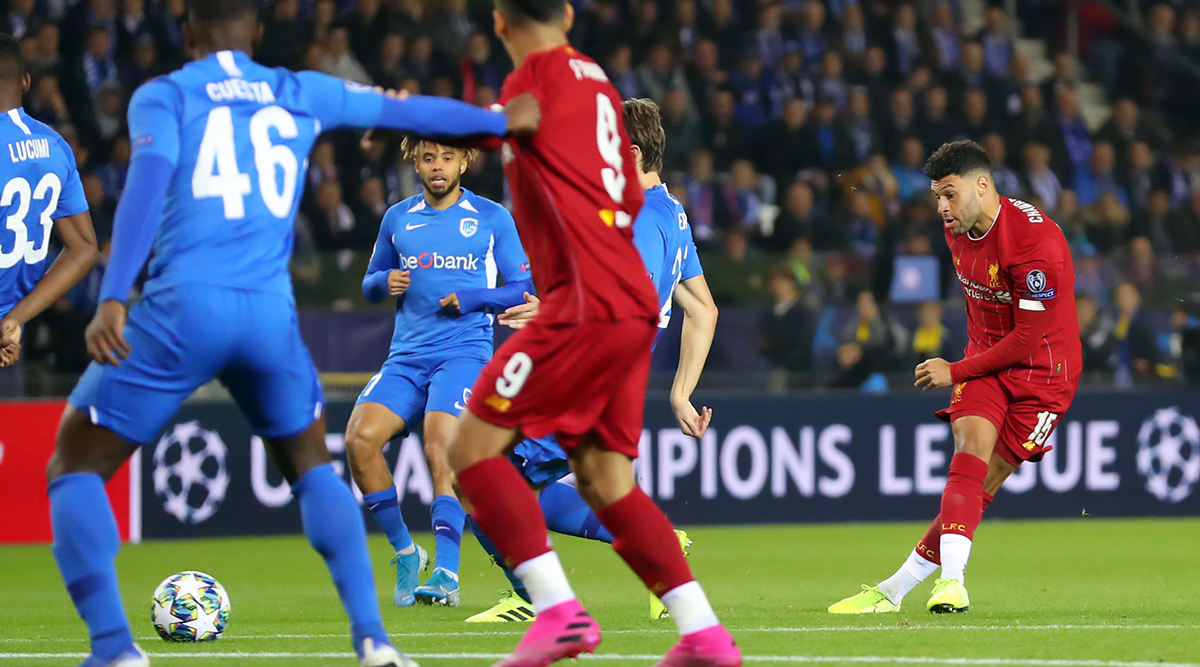 Jurgen Klopp admitted his delight for Alex Oxlade-Chamberlain as the midfielder made the most of a rare start by scoring twice in Liverpool's 4-1 Champions League win over Genk in Belgium on Wednesday. The England international, who missed almost all of last season due to injury and has been used sparingly in this campaign, opened the scoring in the second minute at the Luminus Arena.

He then scored the visitors' second, a sumptuous finish also from outside the box, just before the hour. Sadio Mane and Mohamed Salah added further goals for the holders before substitute Stephen Odey pulled one back for Genk. "Absolutely great moment for him. Ox's performance was exactly like that of the team -- the goals were great but all the rest could have been better, but that's how it is, it's no problem," Klopp said.

His contribution came after another fringe player, Adam Lallana, scored a late equaliser against Manchester United at the weekend. "The goals were sensational and very important for us -- it was wonderful last Sunday when Adam scored the goal and now Ox scored two which was really nice, absolutely great a great story."

Oxlade-Chamberlain, 26, came back from a serious knee injury in time to be an unused substitute in last season's Champions League final victory. "It's a special tournament to play in. It was great to see the boys do so well last year, being on the bench at the end and watching the boys bring it home," he told BT Sport.

"It's nice to be back in the starting line-up and to get a couple of goals is a bonus." This was Liverpool's second consecutive victory in Group E since they began their defence of the trophy with a 2-0 loss at Napoli. They remain a point behind group leaders Napoli. It was also an overdue away win at this stage of the competition for Klopp's side, who had won just once in seven away group-stage matches before this trip.

They went all the way last season despite losing all three away group games. Oxlade-Chamberlain, Dejan Lovren and Naby Keita all started for a Liverpool side deprived of Trent Alexander-Arnold and Joel Matip in defence, while Salah returned after missing the Manchester United clash. Oxlade-Chamberlain opened the scoring from Liverpool's first attempt, his right-foot strike from 25 yards finding the bottom-left corner.

It was difficult not to fear for Genk after that, but the Belgian champions were defending a decent record at home in the Champions League group stage. They had drawn their last five home matches taking in appearances in 2011-12 and in 2002-03 and matches against the likes of Real Madrid, Valencia, Chelsea and Napoli.

Genk were encouraged by an extremely high Liverpool defensive line and their skipper Mbwana Ally Samatta missed a great chance to grab a quick-fire equaliser after bursting through on goal. His strike partner, Paul Onuachu, and Japanese international Junya Ito both squandered chances soon after.

Genk also thought they had drawn level before the half-hour when Samatta headed in an Ito cross. However, the goal was disallowed with a VAR review confirming Ito was marginally offside in the build-up. "When you concede in the second minute you know it's a mountain to climb against these teams," said Samatta, whose team are bottom of the group with one point.

"We will keep going. We still believe maybe we can do something and have a chance to play in the Europa League." Liverpool got their second goal in the 57th minute as Roberto Firmino set up Oxlade-Chamberlain, whose shot with the outside of his right boot went in off the underside of the bar from 20 yards.

That was Liverpool's 200th Champions League goal, but it was not their last of the night, as Salah slipped in Mane to make it 3-0 on 77 minutes. Salah then controlled a Mane pass with his back to goal, turned and slotted in with three minutes left, before Odey's consolation for Genk moments later. Another Liverpool win when these teams meet at Anfield next month will leave them on the brink of the last 16.