‘In exceptional circumstances, exceptional provisions. For the first time in its history, which began in 1956, the Ballon d'Or France Football will not be awarded in 2020, for lack of sufficient fair conditions.’ The France Football in an official statement. 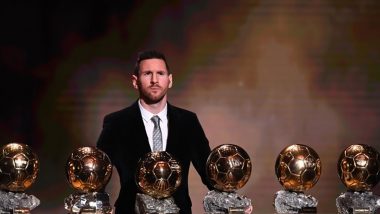 France Football on July 20, 2020 (Monday) announced that the Balon d’Or 2020 has been cancelled amid the coronavirus pandemic. The governing body said that the prestigious prize will not be handed out this season due to the ‘lack of sufficient fair conditions and unusual circumstances’. This is the first time since 1956 – the award's inaugural edition – that the esteemed trophy will not be given for the best football player of that particular year. Lionel Messi Wins Record Sixth Ballon d’Or Trophy, Beats Virgil Van Dijk, Cristiano Ronaldo.

‘In exceptional circumstances, exceptional provisions. For the first time in its history, which began in 1956, the Ballon d'Or France Football will not be awarded in 2020, for lack of sufficient fair conditions.’ The France Football in an official statement. Cristiano Ronaldo & Lionel Messi’s Names Left Out of Ballon d’Or 2020 Race by Robin van Persie.

‘Messi and Rapinoe (as well as[Mattijs] de Ligt and Alisson, winners of the Kopa and Yachine Trophies) will have to wait a year. The winners of the last edition of the BO will have no successors at the end of the year. Because there will be no Ballon d'Or 2020 edition.’ France Football added.

Lionel Messi won the prestigious award last season for the record sixth time, as he surpassed Cristiano Ronaldo’s tally of five Ballon d’Or trophies. The two have dominated the awards in recent years, winning 11 of the last 12 editions since 2008. Megan Rapione won the best women’s player of the year award in 2019 ceremony.

With awards being cancelled, it means that the 2019 Ballon d’Or winners, Megan Rapinoe and Lionel Messi will keep the crown for another 12 months. The award is one of the oldest and generally regarded as the most prestigious individual trophy in football.

(The above story first appeared on LatestLY on Jul 20, 2020 06:08 PM IST. For more news and updates on politics, world, sports, entertainment and lifestyle, log on to our website latestly.com).