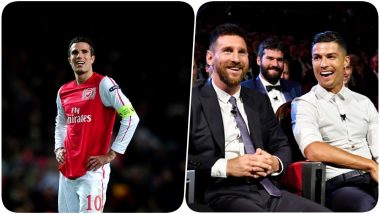 Former Manchester United legend Robin van Persie has left out Cristiano Ronaldo and Lionel Messi from the Ballon d'Or 2020 race. Cristiano Ronaldo and Lionel Messi have been dominating the Ballon d’Or awards for years now. Ronaldo has been bestowed with the award five times in his career, whereas Messi has been a recipient of the same on six occasions. Only Luka Modic received it once in 2018 for his performance for his national team Croatia who reached the finals of the FIFA World Cup 2018. The decision of leaving out the football stalwarts comes as a surprise to the netizens as he has opted for three different names. Cristiano Ronaldo More Likely to Win Ballon d’Or 2020, Lionel Messi’s Rankings Drop.

The former Manchester United legend has is rooting for three names - Bundesliga champion Robert Lewandowski, Manchester City's Kevin de Bruyne and Liverpool's Sadio Mane. Persie spoke about the same on his social media account and left out CR7 and Messi from the probable list of nominees.

Most of the netizens have agreed on Robert Lewandowski to be the next recipient of Ballon d'Or. however, a few others were quite elated with the fact that his opinion does not count. He has grabbed the headlines for scoring more than 40 goals for consecutive seasons in Bundesliga. Sadio Mane has scored 20 goals with 12 assists in 43 appearances for Jurgen Klopp’s Premier League champions. On the other hand, De Bruyne has enjoyed his outing in the midfield for Manchester City, recording 13 goals and 21 assists in 42 games.

(The above story first appeared on LatestLY on Jul 09, 2020 04:11 PM IST. For more news and updates on politics, world, sports, entertainment and lifestyle, log on to our website latestly.com).