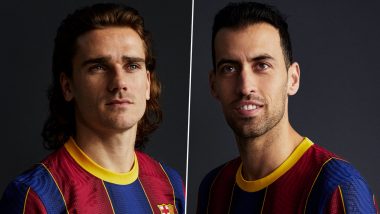 Barcelona became the latest European club to reveal their home kit for the upcoming season. As expected the new home jersey features the traditional Blaugrana colours (Red & Blue). However, the Catalan’s have gone back to their roots, as the checkered pattern which was used for this campaign has been replaced by the old fashioned stripes. On the very first look, Barcelona fans compared it to the treble-winning season. Bizarre Real Madrid 2020–21 Kit With Pink Stripes Leaked Online, Fans Disappointed With New Jersey Design (See Pics).

The kit pays tribute to one of the most successful period in club history. The jersey is reminiscent of the kit which Barcelona wore in the 2010-11 season under Pep Guardiola when they defeated Manchester United in UCL final at Wembley to complete the first treble in their history. Chelsea Unveil New Home Kit for 2020–21 Season, Fans Label Jersey Design As ‘Terrible’ (See Pics).

The new shirt has Red and Blue stripes separated by yellow lines, which also pays tribute to the clubs kit in the 1920s. The new kit will sport Rakuten on the front while Beko will be printed on the sleeve with Unicef on the back.

Barcelona returning to the old-fashioned jersey design has got fans excited about the next season as they hope it can bring back similar kind of success to the club. Here are some of the reactions from the Blaugrana faithful.

Wallahi this kit is back and so is the UCL pic.twitter.com/1ZGzBIQOEB

Speaking of Barcelona, the club are still fighting for the La Liga crown but it looks like a lost cause as Real Madrid need just one win from remaining two games to secure the title. However, the Catalans still have a chance of winning the Champions League, which begins in August. Quique Setien’s men will take on Napoli in Round of 16 second leg, with the tie balanced at 1-1.

(The above story first appeared on LatestLY on Jul 14, 2020 06:30 PM IST. For more news and updates on politics, world, sports, entertainment and lifestyle, log on to our website latestly.com).