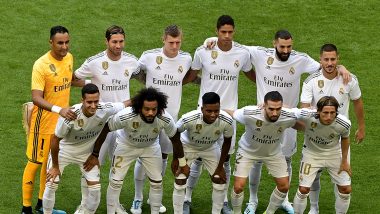 Real Madrid’s rumoured kits for the 2020-21 season have been leaked online. The home jersey is predominantly white with the cuffs of the sleeves having a pink tiger print pattern. The kit for the upcoming season is not yet officially confirmed by the club itself, but as of now it has drawn negative reactions from most of the fans. The official jerseys for the next campaign will mostly be revealed by the end of August. Manchester City’s Rumoured Kits Leaked Online, Fans Post Hilarious Memes as They Hate New Jerseys (See Tweets).

The Real Madrid jerseys were posted on social media by Footy Headlines, who usually share a glimpse of football team kits before they are officially announced. And the new home kit for Los Blancos keeps their traditional white colour with pink highlights on the sleeve.

This will be the first time since the 2014-15 season, that the record Spanish champions will have the colour pink in any of their kits. Adidas stripes run down the side with ‘Emirates Fly Better’ written on the front. Madrid fans have mixed opinions as a large proportion are unhappy with the design while some think it looks great.

@adidasfootball @adidas @adidasUS @realmadrid pleaseeeeeee for the love offff god can u please destroy whatever the fuck this is. Change the kit pic.twitter.com/RW2ZAZtd07

Barca to win another treble

These man really want Barca to win another treble

In my opinion only the third kit is decent 🤦🤦

To be honest, I kinda like them except for the home kit.

Speaking of Real Madrid this season, Los Blancos are two points behind Barcelona in La Liga and are in pursuit o their first domestic league title since 2017. In the Champions League, Zidane‘s men suffered a 2-1 defeat against Man City in the first leg with no schedule fixed for the return fixture as the competition is suspended due to the coronavirus pandemic.

(The above story first appeared on LatestLY on Jun 03, 2020 03:57 PM IST. For more news and updates on politics, world, sports, entertainment and lifestyle, log on to our website latestly.com).