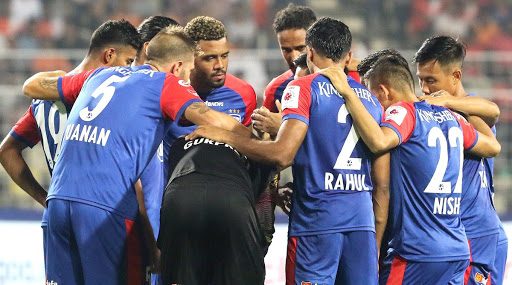 Defending champions Bengaluru FC will eye for the top spot when they face Odisha FC in the Indian Super League (ISL) 2019-20 at home. Bengaluru FC vs Odisha FC match in ISL 6 will be played at the Sree Kanteerava Stadium on January 22, 2020 (Wednesday). A win at home will take Bengaluru FC on top of the ISL 2019-20 points table, 1 point clear of the second-placed ATK albeit having played a match more. They beat Odisha 1-0 at the latter’s home earlier in the season and will be hoping to complete a double over Josep Gambau’s team especially after their successive defeats to Mumbai City – a first for them in ISL history. Meanwhile, fans searching for the live telecast, online live streaming and score updates of BFC vs ODS encounter in ISL 6, can scroll down for all information. Bengaluru FC Vs Odisha FC - Live Football Score.

Juanan’s 37th-minute strike was enough for Bengaluru FC to seal the win in an earlier meeting. The reigning champions have, however, struggled to find the net throughout the ISL season with captain Sunil Chhetri solely shouldering the responsibility of finding the net for his side. Chhetri has scored 8 goals and the next most productive Bengaluru FC player after him is Erik Paartalu with 2 goals from 9 appearances. Bengaluru FC lost 0-2 at Mumbai in their previous game but have a fine record at home. Bengaluru FC vs Odisha FC Dream11 Prediction in ISL 2019–20.

Odisha FC, in contrast, are on a four-match winning streak and beat Hyderabad FC 2-1 in their last away ISL game. But despite the good run of form and results, Odisha FC coach Josep Gambau will be worried about his side’s drastic away results where in 7 matches, Odisha FC have won 2 matches. Odisha FC Aridane Santana is the top-scorer in ISL 6 with 9 goals and will be hoping to continue his goal-scoring streak.

Bengaluru FC vs Odisha FC match in ISL 2019-20 will be played at the Sree Kanteerava Stadium in Bengaluru on January 22, 2020 (Wednesday). BFC vs ODS match is scheduled to start at 07:30 pm IST (Indian Standard Time).

Hostar, the official online media streaming site of Star Network, will be live streaming the Bengaluru FC vs Odisha FC ISL 2019-20 match for its online fans. Meanwhile, fans can also follow LatestLY for the live score updates of BFC vs ODS ISL 6 match.

Bengaluru FC are ranked third in the ISL 2019-20 points table with 22 points from 13 matches. They are just separated by two-points from FC Goa and ATK, who are on same points (24) but ATK lead on better goal difference. Odisha FC are placed 4th with 21 points from 13 games and can displace with a victory.