The Blues would be competing in their 100th ISL game and they would like to mark this with nothing less than a victory, which could reignite their hopes of finishing in the top-four. Continue reading to get live streaming and telecast details of this game. 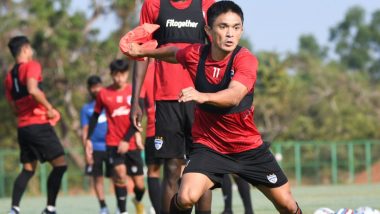 Sunil Chhetri trains ahead of the match (Photo credit: Twitter)

Bengaluru FC would lock horns with Odisha FC in a crucial Indian Super League fixture on Monday, February 21. The match is a very important one for both these teams, as they hope to stay alive in the race for a top-four spot. Bengaluru FC are heading into this clash having lost their previous match against NorthEast United FC. As a matter of fact, they are currently on a two-match losing streak and Marco Pezzaiuoli would be keen on changing the club's fortunes with this game. Odisha FC are not in good form either, with the club having had a loss and a draw in their last two matches. Indian Super League Points Table 2021–22 Updated

Both sides would be aware of the fact that their chances of making it into the top four not only rest with them but also on the results of other matches. As of now, things are looking bleak for both teams. Pezzaiuoli confirmed that Gurpreet Singh Sandhu would miss this game while his opposite number Kino Garcia said that he has a full-strength squad at his disposal.

The Bengaluru FC vs Odisha FC match in ISL 2021-22 will be played at the Athletic Stadium, Bambolim. The match will take place on February 21, 2022 (Monday) and it is scheduled to begin at 07:30 pm IST (Indian Standard Time).

Where to Get Free Live Streaming Online of Bengaluru FC vs Odisha FC, ISL 2021–22 Football Match?

Fans can also watch Bengaluru FC vs Odisha FC match online. Since Star Sports network is the official broadcaster of ISL 2021-22, Disney+Hotstar will be live streaming the BFC vs OFC clash online for fans. JIO and Airtel subscribers can also follow the match on JIO TV and XStream.

(The above story first appeared on LatestLY on Feb 21, 2022 04:38 PM IST. For more news and updates on politics, world, sports, entertainment and lifestyle, log on to our website latestly.com).