The ISL 2021-22 will be held across three stadiums in Goa- Jawaharlal Nehru Stadium, the Tilak Maidan and GMC Athletic Stadium. Each team will be awarded three points for a win and one point for a draw. In case of a washout or match cancellation, each team will share a point each. The top four teams advancing to the ISL playoffs. 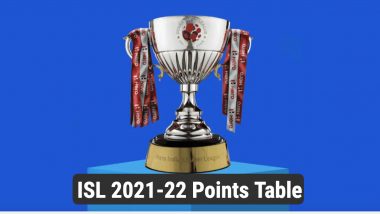 Hyderabad FC, Jamshedpur FC, Kerala Blasters and ATK Mohun Bagan have officially qualified for the ISL 2021-22 playoffs. Defending champions Mumbai City FC were knocked out of contention a day ago when they lost to Hyderabad 2-1. Meanwhile, you can check the updated 2021-22 ISL points table and team standings below along with goal difference. ISL 2021-22 Full Schedule For Free PDF Download Online.

Indian Super League (ISL) began on November 19 with ATK Mohun Bagan taking on Kerala Blasters in the opening game. For the second time in a row, the ISL will be held behind closed doors in Goa due to the coronavirus pandemic. The organisers have released scheduled for the first 55 matches and the rest will be announced later. The ISL 2021-22 will be held across three stadiums in Goa- Jawaharlal Nehru Stadium, the Tilak Maidan and GMC Athletic Stadium. ISL 2021-22 Live Streaming Online: Get Live Telecast Details Of Indian Super League Season Eight on TV in India

(The above story first appeared on LatestLY on Feb 21, 2021 11:17 PM IST. For more news and updates on politics, world, sports, entertainment and lifestyle, log on to our website latestly.com).