Christian Eriksen Opens Up on Returning to Football, Eyes 2022 World Cup in Qatar

The 29-year old suffered a cardiac arrest during last year's Euro 2020 championships and has not been in action since. But Eriksen states that he is fitness and ready to make a comeback, saying, "Physically, I'm back in top shape. That's been my goal and it's still some time away. Until then, I'm just going to play football and prove that I'm back at the same level." 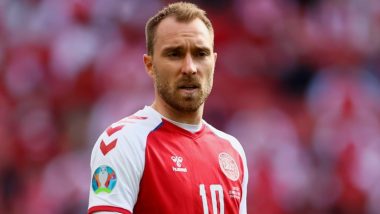 Denmark midfielder Christian Eriksen is keen on participating in the 2022 World Cup in Qatar. The player had made headlines in 2021 when he collapsed on the pitch during a match in the Euro 2020 with a cardiac arrest. A defibrillator was surgically implanted in him. Eriksen has not been seen in action since then but the 29-year old has said that he is fit and is ready to compete in the showpiece event in Qatar later this year. Speaking at an interview with Danish TV, he said, "My goal is to play in the World Cup in Qatar. I want to play. That's been my mindset all along. It's a goal, a dream. Whether I'll be picked is another thing, but it's my dream to come back. I'm sure I can come back because I don't feel any different." Christian Eriksen Spotted for the First Time Since Getting Discharged From Hospital, Check Post

"Physically, I'm back in top shape. That's been my goal and it's still some time away. Until then, I'm just going to play football and prove that I'm back at the same level," he added.

He was thankful for all the good wishes he received while he was at the hospital. Speaking up on how that made him happy, he said, "It was amazing that so many people felt the need to write or send flowers. It had an impact on so many people and they felt a need to let me and my family know. That makes me very happy."

Adding that he did not expect so much support, Eriksen further shared, "At the hospital, they kept saying I'd received more and more flowers. It was weird, I didn't expect people to send flowers because I'd died for five minutes. It was quite extraordinary, but it was very nice of everyone and it's been a big help to me to receive all those best wishes. And people still write to me. I've thanked people I've met in person. I've thanked the doctors, my teammates and their families in person. But all the fans who've sent thousands of letters and emails and flowers – or who've come up to me on the street in both Italy and Denmark – I thank them all for the support I got from all over the world that helped me through this."

The midfielder, who was once a hot prospect in European football, had his Inter contract terminated after this incident and if he returns to the field once again, he can have some clubs interested.

(The above story first appeared on LatestLY on Jan 05, 2022 12:21 PM IST. For more news and updates on politics, world, sports, entertainment and lifestyle, log on to our website latestly.com).