Cristiano Ronaldo's agent, Jorge Mendes, will meet wit7h the Juventus hierarchy soon with hopes of reaching a solution for his client's future. English giants, Manchester City are one of the clubs tipped to have expressed their interest in signing the five-time Ballon d'Or winner. 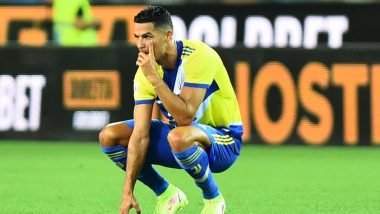 Cristiano Ronaldo's future at Juventus still remains uncertain as reports have emerged that the Portuguese footballer is searching for a move away during the final days of the Summer Transfer window. The five-time Ballon d'Or winner arrived in Turin in 2018 and has been their star performer since, but disappointments on European stages and recent domestic struggles from the Bianconeri, has seen the 36 -year-old in search of a new club. Cristiano Ronaldo Transfer Rumours: CR7 Reportedly Offered Two-Year Contract by Manchester City.

The Portuguese star was left out of the starting XI in Juventus' Serie A opener against Udinese last week by manager Max Allegri with reports suggesting that the 36-year-old had asked to start on the bench as he looks to sort out his future with the Turin outfit. Cristiano Ronaldo Transfer News: Juventus Star Denies Potential Real Madrid Return.

According to Fabrizio Romano, Cristiano Ronaldo's agent, Jorge Mendes, will meet with the Juventus hierarchy soon with hopes of reaching a solution for his client's future. English giants, Manchester City are one of the clubs tipped to have expressed their interest in signing the five-time Ballon d'Or winner.

It is understood that despite the interest from Manchester City, the Premier League outfit are looking to land the Portuguese star on a free transfer as they are unwilling to match Juventus' asking price according to Corriere dello Sport. The defending English champions are likely to selling winger Raheem Sterling in order to make way for Cristiano Ronaldo.

Juventus are also open to selling their last season's top scorer, who has a year left on his contract and will be a free agent next summer as they look to reduces the wages amind COVID-19 pandemic. The Turin club want a fee of around €28/30 million for Cristiano Ronaldo, who earns around 31 million euros a year but Manchester City aren't willing to match that amount.

The Pep Guardiola outfit were hoping to land Harry Kane in the transfer window after acquiring the services of Jack Grealish from Aston Villa for a British record fee. But have turned their attention towards another alternative after the Tottenham Hotspur skipper decided to stay in North London.

(The above story first appeared on LatestLY on Aug 26, 2021 06:27 PM IST. For more news and updates on politics, world, sports, entertainment and lifestyle, log on to our website latestly.com).