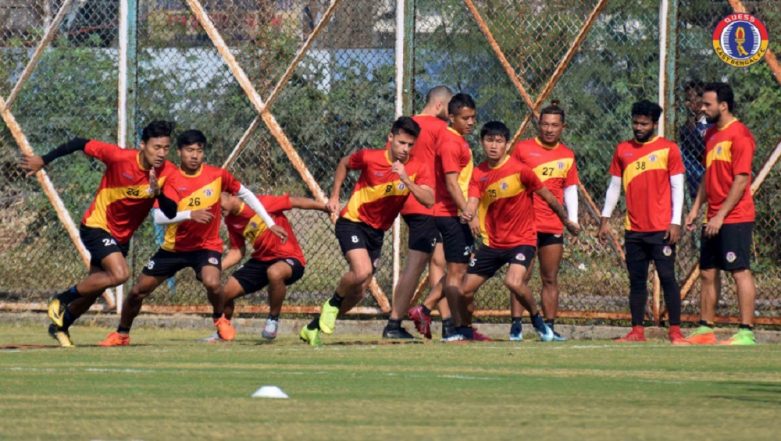 Kolkata, February 13: High on confidence after their brilliant come-from-behind win against Neroca FC, an in-form East Bengal will look to further cut the gap at the top of the table when they take on wooden spooners Shillong Lajong FC in an I-League encounter at the Vivekananda Yuba Bharati Krirangan here on Thursday. East Bengal, aiming to win their maiden I-League title, registered a spirited 2-1 victory over Neroca last week riding fit-again Enrique Esqueda's brace in the last 25 minutes of the match.

Placed fourth in the table with 28 points in their kitty from 14 games, the red and golds could go within three points of leader Chennai City FC (34 points), who frittered a three-goal advantage to draw 3-3 against Neroca in their last outing. Chennai have also played two matches more than East Bengal, thus tilting the scales in the latter's favour provided they take their chances. East Bengal Postpones Footballer Johnny Acosta Unveiling Due to Absence of Interpreters.

"We have to think positive and enjoy every game. The most important thing is that everybody in the team enjoys their game and tries to achieve success," East Bengal's Spanish coach Alejandro Menendez said on the eve of the match. Menendez might make some changes in the starting XI. Jaime Santos Colado, who is in sublime form at the moment, had suffered a neck injury against Neroca. The Spanish attacker has just recovered from his injury and might find himself on the bench for further rest, which could see Enrique being handed a start.

"I still don't know who will start tomorrow against Shillong Lajong. It is a problem for me to choose 11 players but it is a good problem to have," the coach maintained. East Bengal also have matches in quick succession, and keeping in mind the more tougher ones, Menendez might tweak a bit with the team.

"I think the speed of a match is always important. And now as we are advancing in the league all the teams are playing with great speed not only with the ball but also off the ball. You have to operate really fast," he said. Talking about their opponents, who have only 10 points to show for from 15 matches, Shillong Lajong have chalked up some form recently with wins in two consecutive matches over defending champions Minerva Punjab FC and title contenders Churchill Brothers.

"We played Minerva Punjab away and won and then played Churchill Brothers at home and won again. I think those results gave us the belief that we can beat any team," Lajong coach Alison Kharsyntiew said. "But to play against East Bengal it will be difficult because East Bengal are a big club with so many good players. Tomorrow will be a very good game and I hope the players do well and we get the three points," he added.

Against Churchill, Lajong took a two-goal lead in the first half but Churchill came back into the game in the second half by scoring twice. But the minnows fought hard and finally scored one in the final moments of the match to seal full points.