East Bengal's much-anticipated first formal interaction with Costa Rican World Cupper Johnny Acosta turned out to be a farce and was called off today because of non availability of an interpreter. 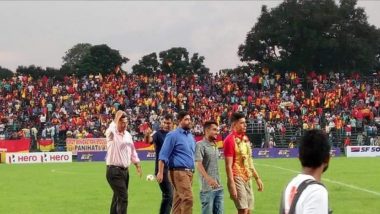 Kolkata, Aug 8 (PTI): East Bengal's much-anticipated first formal interaction with Costa Rican World Cupper Johnny Acosta turned out to be a farce and was called off today because of non-availability of an interpreter. East Bengal CEO Sanjit Sen announced that Acosta speaks "only Spanish" but their professionalism was exposed soon as the club had forgotten to arrange an interpreter.

The room was crowded with 50-plus media persons, all wanting to ask questions on the defender who rubbed shoulders with the likes of Neymar and Coutinho during the recent 2018 FIFA World Cup in Russia. The 35-year-old defender, who featured in all three group matches of Costa Rica in the World Cup, tried his best taking the help of Google Translate, the widely used tool that instantly translates phrases and words. But all his efforts went in vain as there was no internet connection. East Bengal officials tried to shift the interaction to another room with better connectivity but only to be left more embarrassed.

"We will have the interaction later," said an official and the 50-odd anxious media persons had to leave dejected. The club, meanwhile, revealed that Acosta would don jersey number 2, the same number that he wore for the national side in the recently concluded World Cup. Acosta, who played for Colombian premier league side Rionegro until the Russia World Cup, landed here on August 6 and also watched East Bengal's local league match against WB Police. "After the World Cup, I have had regular gym sessions to keep myself fit. I'm a professional player. If the coach wants me, I'm ready to play. I'm raring to go in East Bengal jersey," he had said after the arrival.

"I'm glad to be part of Indian football. It's a new challenge for me. I've heard a lot about East Bengal from my agent and other friends. Hopefully, I'll be able to help my team win trophies," he said.

Acosta, with 71 International matches for Costa Rica, was impressive against Neymar's Brazil, who required two stoppage-time goals from Coutinho and Neymar to beat them 2-0. He was also part of Costa Rica's team in the 2014 World Cup. Acosta had sought advice from his friend and former Costa Rican World Cupper Alexandre Guimaraes, who has been in charge of Mumbai City FC since 2016, before coming to India.